One of the tallest living walls in the United Kingdom – complete with wild strawberries – has been installed on a new innovation hub in the North East, Science Central.

The 27m-high green construction has been installed onto the side of The Core, the first building on the 24-acre Science Central development in Newcastle, creating a vertical garden of ivies, seagrass, thyme, primulas, euphorbia and nesting boxes.

The wall forms part of plans by Newcastle Science City, the partnership responsible for delivering Science Central, to create a world-leading example of urban sustainability, to attract leading organisations to locate in the region.

The wall was put together by constructing rails on the side of the building onto which boxes of 12 plants – grown in ANS Group’s nurseries – were slotted, before being linked into an irrigation system.

“We have received a really positive reaction to our living wall. It is quite unique and is the first and largest of its kind known to have been installed this far north.

“The aim of installing the wall was to attract a huge amount of wildlife to the local area, including insects and smaller birds, which will be able to benefit from the plants that are being grown on Science Central. We’re also installing bee ‘hotels’ onto the building which will encourage even more flora and fauna in the local area.”

The biggest challenge when installing the wall was its height. It took a team of four two weeks from putting in the first rail to the last plant.

The Core will be the first building to open for business on Science Central in November 2014.

The building will be surrounded by open public spaces with wild flower and grass meadows, connecting the Newcastle’s West End directly to the city centre once more.

Science Central is a 24-acre development delivered by Newcastle Science City, a partnership between Newcastle City Council and Newcastle University. 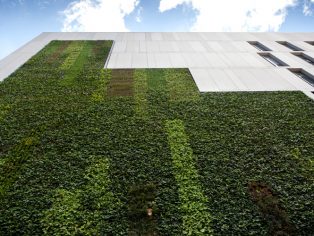