Ryder Architecture’s transformation of Newcastle Central Station has been recognised by the prestigious National Transport Awards as a finalist in their Rail Station of The Year category.

The only grade I listed station outside London, Newcastle Central Station now has a new simplified layout concourse opening sightlines to Castle Keep, reemphasising the distinctive curvature of the historic arched roof.

The centrepiece of Ryder’s redesign is the pedestrianised, glazed portico, creating a new public space with shops, cafes and customer service points.

The £8.6 million project offers thousands of passengers a welcoming first impression to the city and is a key component of wider regeneration of the surrounding area.

“Although in many ways quite a subtle reinterpretation, the changes to the station clearly have had a big impact not only in terms of opening up the portico for pedestrians where once it was dominated by cars, but also from the improved perception one now gets coming to the city, complemented by the station’s external works.”

Winners will be announced at an awards ceremony on 8 October at Westminster Park Plaza. 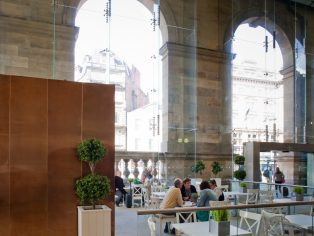