Rochester commuters are enjoying their new £26 million station with five extra trains to London during the morning peak and longer platforms.

Built by Network Rail and operated by Southeastern, the station’s bright and modern environment and its central location with good transport links will mean that visitors to the town will enjoy a much better welcome.

In addition, the new station is linked to the riverside at Rochester via a subway, opening up the area and making it more suitable for development. A new multi-storey car park will open there in 2016, making Rochester one of the most attractive commuter stations in Kent.

“This is a really impressive new station for Rochester, which is now delivering better journeys for passengers in the area, as well as transforming rail capacity and connectivity. It is a station the town can be proud of and offers a big opportunity to boost economic growth in the area.

“This is also a significant step forward for the East Kent Resignalling project, which will allow better use of the rail network in Rochester and the surrounding areas. It is brilliant to see our investment in rail make a real difference to passengers who use this station on a daily basis.”

“The improvements Network Rail is making to the railway in the Medway Towns are already delivering big benefits for passengers. This fantastic new station is also a perfect example of how the investment we’re making across Britain through our Railway Upgrade Plan can be a catalyst for economic growth.”

“It is great news that the new station has opened in Rochester. I believe this highlights and shows our commitment to the area, a major part of our commuting network.

“The new station is much brighter and is now much closer to the historic heart of Rochester, which is good for commuters, local businesses on and around the High Street and the hundreds of thousands of people that visit each year.”

“Rochester’s new station is a key part of the regeneration of the riverside and will also attract more people to come and visit our city. It’s great to see this open on time and full of passengers.”

“Not only is this an important day for commuters and traders who now have a fantastic railway station on their doorstep to bring people into the heart of the town, but it is a very important day for Medway as a whole.
“The station is the catalyst for the huge Rochester Riverside regeneration scheme which will create an entirely new destination of homes and leisure facilities along the waterfront which will compliment historic Rochester and bring many local jobs to Medway.”

Rochester’s new station was designed to allow 12-car trains to call at the town, in conjunction with improvements to the signalling and track in the area. In April 2016, the signal box at Rochester will be removed and a third platform introduced at the station, increasing flexibility and improving reliability.

“As the principal contractor and lead designer for the East Kent Re-signalling Phase 2 project we are working with delivery partners to upgrade 33 miles of the network to help deliver a more modern and reliable rail service for passengers.” 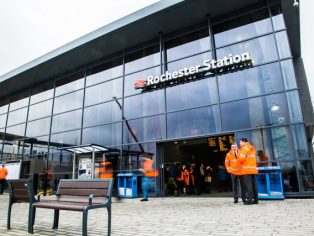