Moxon Architects, working with engineers Arup, have unveiled the new pedestrian bridge for the King’s Cross Central Limited Partnership (KCCLP). The bridge spans the Regent’s Canal between Camley Street and the new Gasholder Gardens, forming an important connection for pedestrians and cyclists to the west, into Somers Town.

The entire 38m span of the bridge is only 15mm thick and achieves a minimum depth of 400mm at each end.  In keeping with the great Victorian design in the surrounding vicinity, the bridge is robust, with detailed craftsmanship and a careful selection of materials for a minimalist finish. The form of the bridge precisely matches its bending moment, making it a direct demonstration of where steel is required in the beam. In a material sense it is ‘lean’ design.

A sweeping ramp leads people up to the bridge and over the water. An elegant parapet transitions from stainless steel to planed hardwood, changing in shape from the curved profile of the beam to the perfectly straight line of the handrail; the railing materials were especially considered as they form the key physical connection between the bridge and the user.

By locating the structural depth above deck level the design maintains a clear view of the canal south from St. Pancras Lock: the air draught is maximised, ensuring that any canal boats waiting to use the locks can be surveyed without the bridge obscuring them, as well as keeping views to the St. Pancras Lock and Cottage as open as possible.

The project site covers land owned by three different parties: The Canal & River Trust for the airspace over the Regent’s Canal and associated towpaths; the London Borough of Camden for the Camley Street Natural Park, which in turn is leased to the London Wildlife Trust (LWT), KCCLP; and the client. All of these partners have been instrumental in the design development process of the bridge.

The bridge connects two very different sites: from the sophisticated urbanism of the Coal Drops Yard to the east, to the natural and wild Camley Street Natural Park at the western abutment. It is located within the Regent’s Canal Conservation Area, and surrounded by several listed structures, including the St Pancras Water Tower.

“The ambition for this bridge has been to achieve ‘extreme simplicity’ in terms of form and material use. It is a considered and beautiful addition to the location, but even more than this we have developed a design that is as emphatically and enjoyably practical as its Victorian neighbours.”

Ian Wilson, project director at Arup added: “Pedestrians and cyclists can now enjoy travelling to and from King’s Cross and Camden with ease by using this new connection. It is a fitting addition to the King’s Cross development as the complex geometry and robust engineering has resulted in a slender and refined bridge, which also echoes the site’s industrial past.”

The King’s Cross development already benefits from a growing mix of amenities including bars and restaurants, fantastic public parks and squares, arts and exhibition spaces and the new public swimming pools and gym in Camden Council’s new headquarters. 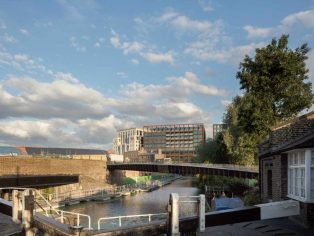