Specialist regeneration developer Blueprint has submitted a planning application for its next major development – up to 160 low energy homes at Trent Basin, Nottingham.

Trent Basin is located within Nottingham Waterside, an area widely acknowledged as one of Nottingham’s greatest but least developed assets. Stretching from Trent Bridge to Colwick Park, the area is the focus of major redevelopment proposals with Blueprint’s plans as a major catalyst for change.

The developer has signed a conditional land agreement with the Homes and Communities Agency for a nine-acre site off Trent lane. The site has long waterside frontage, close to Colwick Park with attractive views over the River Trent to Lady Bay and is just a ten-minute cycle ride from the city centre.

“At Trent Basin, we will be creating a new residential neighbourhood with distinctive contemporary homes overlooking one of the city’s most enviable outlooks. It really is an outstanding location. It is a special privilege to be part of the renaissance of this extraordinary place.”

“The HCA have worked extremely hard to get the project to this stage. Having acquired the site many years ago we’ve demolished buildings and cleaned up the site, and we are now really pleased that Blueprint will be bringing their expertise to build high quality new homes that will revitalise the area and open it up to new residents to enjoy this fantastic riverside location.”

“The creation of a new residential community at Trent Basin has been a longstanding aspiration, and it is excellent news that the proposals for the initial phase of development have now been submitted by Blueprint. Nottingham Waterside is a wonderful but unexploited City asset, and I believe that this initial phase of high quality low energy housing will act as a spur to the further regeneration of land and property alongside the river.”

Trent Basin will provide homes with a mix of contemporary quality and low energy costs. Comprising predominantly three- to four-bed homes, it will break the mould for edge of town waterside developments in English cities that up to now have been dominated by apartments.

Blueprint’s vision is of a new kind of sustainable neighbourhood, neither urban nor suburban but somewhere between the two. Tall, elegant houses fronting well-designed streets with a design partly inspired by Dutch canal houses will help create a distinct identity. Open views over water and green spaces will reinforce the sense of place. Less than 1.5 miles from the city centre and even closer to the station, accessibility to work, shopping and transport is a major attribute.

Rather than the bars and pizza restaurants of conventional waterside developments, it will be more a place for fishing, boating and exercise. It will be a haven for cyclists, dog walkers and joggers, a place of escape yet close to the urban centre.

In partnership with the HCA and in consultation with Nottingham City Council, Blueprint has worked up a comprehensive master plan for the overall scheme, including details for the first phase of 41 homes. It is hoped the scheme will spark an organic transformation of Nottingham waterside, eventually turning this former inland harbour into a thriving new neighbourhood.

Nottingham City Council will upload the planning documents to its website shortly after submission, and there will be a 21 day period within which people can submit comments in respect of the proposals.

Subject to planning permission, start on site will be in summer 2014 with the first phase of 41 homes complete in 2015. 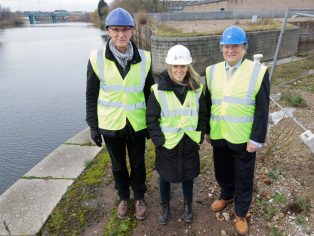 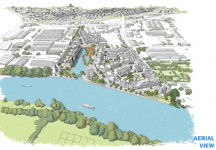 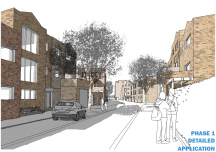