With work underway to transform a former home of Essex County Council, buyers are being urged to register their interest if they want to have their pick of the new homes being built in its place.

The site was previously owned by Essex County Council since the 1930s, who most recently used it to house Schools, Children and Adult Services. Redrow submitted an informal tender and were chosen to acquire the site in December 2012. A public consultation was held before plans were drawn up for the new homes.

Known as King’s Park, the gated development will offer a choice of two-bedroom apartments plus three, four and five-bedroom homes.

Now, with building work well underway and showhomes due to open in January, Redrow is inviting prospective purchasers to get in touch.

“Our forthcoming King’s Park development in Lexden will transform the site of a redundant office block to provide 31 new homes. Because of the limited availability we’re anticipating high demand and would encourage anyone looking for a new home in the Colchester area to contact us without delay. We’ll keep customers informed of our progress, including inviting them to a special preview event and updating them as to when the showhome will open.”

Built with modern living in mind, they will feature spacious open plan kitchen / dining areas at their heart, ideal for family living, plus high quality fixtures and fittings including top brand name appliances.

Mature trees on the site will be retained and incorporated into public open space. Redrow will also make a contribution to affordable homes for local needs.

“The development will also have a positive impact on the local economy with industry statistics showing that 1.5 full time jobs are created for every home built – and that’s not including jobs in the supply chain.”

Situated just a mile from the centre of Colchester, residents of King’s Park will benefit from having a wealth of amenities close to home.

It’s a great base for commuters as trains from the local station offer journey times to London Victoria of less than an hour. 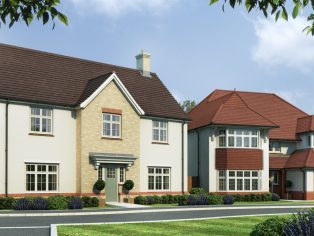