Schools, healthcare facilities and a library in East Leake are among the potential beneficiaries of a cash injection from Redrow.

The award-winning housebuilder has been given detailed planning consent to build 61 homes on a 2.45 hectare site off Meeting House Close in the Nottinghamshire village.

Known as The Willows, the £13 million housing scheme will offer 43 homes for private sale in a choice of three four and five-bedroom designs.

The remainder of the development will be affordable homes for local needs including bungalows, apartments and houses with one, two and three bedrooms.

Redrow’s new homes will bring a raft of benefits to those already living in the area, as the housebuilder has pledged to invest more than £1.6 million in the local community.

“The additional benefits new housing can bring are often overlooked, including employment, support for local shops and services, plus the associated investment in the surrounding infrastructure.

“In East Leake Redrow will be committing £1.3 million to the building of 18 affordable homes to meet local needs, but it doesn’t stop there. We’re also supporting Brookside Primary School and East Leake Library, contributing towards a new or improved medical centre and helping to improve playing fields. These measures will benefit people already living in the neighbourhood, along with those who buy our homes.”

Redrow will pay £149,000 for the provision of new school places at Brookside Primary School, which is within walking distance of the new homes.

Almost £56,000 will be given towards a new or improved medical centre and Redrow will also make a donation towards increasing stocks of books and other resources at the local library.

Sports facilities at Costock Road playing fields will receive a boost of more than £26,000.

An area of public open space will be included as part of the development, while existing play areas in the village will benefit from £34,000 towards improvements.

The first homes at The Willows are due to be released for sale in June. Featuring designs from the sought-after Heritage Collection, the homes will look traditional from the outside taking inspiration from the architecture of the Arts & Crafts era. Inside they will be bright and modern, with open plan layouts and a high specification as standard.

Situated between Nottingham and Loughborough, with Derby to the east and Leicester to the south, The Willows at East Leake offers the chance to embrace village living but with easy access to several major cities.

Potential purchasers can register their interest in the homes at The Willows via the website www.redrow.co.uk/willows or by calling 01509 9769577. 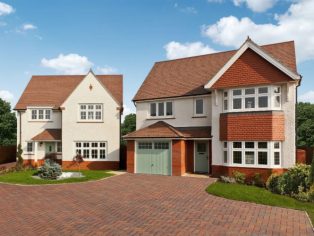