New gardens at the heart of Quintain’s Wembley Park development

Quintain’s new residential development at Wembley Park has achieved planning consent from Brent Council, helping to reinvigorate and create a sense of place and identity for the site in north-west London. Independent design, environment and sustainability consultancy, LDA Design, is the landscape and public realm architect for the scheme.

The landscape and public realm has been an important element throughout the design of the scheme and is inspired by the traditional London garden square and heritage of the city. Elvin Square Gardens, named after Alfred Elvin who saved the national stadium from demolition in 1924, forms the centrepiece of Quintain’s North West Village and creates an open and spacious landscape, including a large neighbourhood park, which incorporates a ‘playable landscape’, a proposed theatre to the north, Alto to the west and future residences to the east.

Alto comprises terraced podium gardens, Italian landscape inspired terraces open to the south, a central plaza space where residents can get together, south-facing terrace seating, an entertainment lawn for families and a sensory garden where lawns are defined by water features. The public realm and streetscape has also been designed to provide attractive, safe routes and spaces for residents.

“We have been working closely with the architect Flanagan Lawrence on Alto and are also leading the infrastructure and public realm design team for the park, squares and streetscape. The vision is to create a strong urban and civic environment which celebrates ‘heroic’ views, defines clear movement routes, and provides new vistas and intimate, resident-focused places.”

Quintain will have 845 new homes under construction at Wembley Park this year and the first 474 are due for completion by winter 2016. 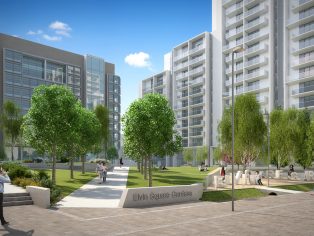