Maccreanor Lavington’s award-winning South Gardens in south London is a showcase of brick’s ability to help major new housing projects blend in to their context, as well as provide detail and variation. Roseanne Field reports.

South Gardens forms the first phase of the Elephant Park development in south London – a £2bn project by Lendlease and Southwark Council that sits on the site of the former Heygate Estate. The name doesn’t come from the development’s huge scale, but from the regenerated neighbourhood of Elephant & Castle.

Due to complete fully in 2025, the development comprises 160,000 ft2 of retail space and a total of 2,500 residential units. Of these, 500 will be affordable and less than 100 will be for social rent, with the rest up for private sale. The fact the now-demolished estate provided 1,200 social rented units saw the scheme replacing it seeing its share of controversy.

Undeterred, Lendlease and Southwark Council stuck to their vision that Elephant Park will be “London’s new green heart,” and a place “where everybody loves to belong.” And so far, given the race to buy flats in the scheme pre-completion, they are not wrong. South Gardens was designed by Maccreanor Lavington (bar an energy centre by Duggan Morris) and completed at the end of 2017.

Even the most vociferous critics of Elephant Park would have a hard time defending the aesthetic of its predecessor’s concrete slab blocks. Maccreanor Lavington’s brick-clad replacements by contrast focus on respecting the local Victorian architecture, as well as the building’s current and future residents.

The tallest is a 16-storey red brick blend tower (H06D on plan shown above) that houses 60 one, two and three bedroom apartments. Each features its own inset balcony – to break up the facades and offer amenity for all residents. “They work really well that way because they feel like an extension of your apartment and not simply an addition,” explains Gerard Maccreanor, director of Maccreanor Lavington. For a practice renowned for its detailed brick-work designs, it is of course also important not to let balconies “dominate the facade,” he adds.

The tower’s double-height ground floor will eventually be home to retail units. It also boasts a 24-hour concierge service, gym and communal residents area and terrace on the 16th floor. An eight-storey block (H06C) is connected to the tower, featuring a green roof and solar panels as well as the same double-height retail units.

To the east of this block, lining the northern side of Wansey Street, is a collection of 15 three and four bedroom townhouses (H06A and H10A). These houses have been built to Passivhaus standard with a cross-laminated timber (CLT) frame, and have an almost zero energy bill. They have been designed to emulate the Victorian terraced houses on the other side of the road and are finished with a yellow-white brick. The street is reasonably wide, with many of the existing trees were retained.

The portion of affordable housing sits on the east of South Gardens (H13A, B and C). These blocks are finished with the Mystique brick and feature large bay window-style inset balconies – another design decision influenced by traditional local architecture. “It’s traditional throughout London,” explains Maccreanor. “A lot of mansion blocks have bay windows which are about getting views out and more light in.”

External balconies facing onto busy road are rarely used. “The balcony as a bay is a more protected space and works as a more appropriate language for the front facade and streetscape,” says Maccreanor.

Running up the side from the end of the townhouses and part of the way along Heygate Street are two mansion blocks built in another red brick blend (H10B and C). The lower of the two is three-storeys high, while the other sits at eight-storeys. These blocks are of different tenures – H10B is all affordable while H10C is almost entirely private – as well as two houses that sit on the top levels of the eight-storey block. A roof terrace has vegetable grow beds that can be rented by South Gardens residents.

The last of the eight buildings (H06E and F) is another eight storey mansion block, stretching along Heygate Street until it meets the 16-storey tower. Similarly, this features a range of apartment types, and a green roof. Rain gardens have also been designed into the development at various points.

Both these mansion blocks feature balconies overlooking the rear courtyard rather than inset balconies. “Exterior balconies work much better with private courtyards,” Maccreanor says. For these balconies Maccreanor Lavington designed bespoke laser cut balustrades that give protection and enclosure while allowing a degree of transparency.

In the architect’s view, brick is now almost the “default material” for cladding such schemes, and “there is a move away from other materials.” The 2017 edition of the Brick Awards saw South Gardens winning Large Housing Development and the Supreme Award, among five gongs in total for the practice. The judges described South Gardens as having a “level of refinement”, which was gratifying for Maccreanor, who says the practice prides itself on “careful detailing of all the elements in the facade”. He adds that being “a specialist in brick” means “knowing how to get the best out of them, knowing the right ones to choose, knowing what type of details you can achieve.”

Detailing is key to the success of the South Gardens development, which illustrates the decorative abilities of the material in its various facades. Each of the buildings has a unique look, thanks to applying a limited palette of brick varieties judiciously across the buildings. This variety was important to the client. “Lendlease didn’t want ‘one’ development, they wanted us to make a number of different buildings with different architectural styles so it really feels like part of the city,” explains Maccreanor. “If this had all been one style it would have been quite substantial whereas as it’s broken into different buildings, different heights, it becomes varied, but it all blends in.”

Summarising their brick specification choices, Maccreanor says: “There’s are a number – it’s a Mystique on a number of the buildings and then two of the others have different tones of red and brown brick, and then there’s lots of detailed brick. We definitely wanted these to be a family of buildings, so that there is some relationship between them.”

Only a handful of different brick types were used, but Maccreanor Lavington used mixes in different ways to provide decorative variation on each building. “It’s not just changing the colour of the brick,” Maccreanor explains. “Some buildings have much more decorative elements than others. That was important.”

One brick in particular that has been used across almost all the buildings is a pale glazed product. Of course its use is partly as a decorative element – on the majority of buildings it’s used laid vertically on the lintels. However, there is also a more practical reason. “We also used it down the side of windows, which is about reflecting light into the rooms and inset balconies,” Maccreanor explains.

This combination was also used on the mansion block HO6E/F (see right), but to different effect. The ground and first floor layer them alternately in a horizontal striped pattern. Similarly the tower and adjoining block utilise a black glazed brick up to door height, where the white glazed brick then takes over to the top of the first floor. “There’s more attention on the lower levels because that’s what you walk past and are close to, that’s what you really see,” says Maccreanor.

The practice has been working with glazed brick in many of its recent projects. “It’s a traditional way of decorating buildings in London – historically many pubs used glazed bricks to elaborately design their ground floor,” Maccreanor explains. “It’s something that people are familiar with in the city, and provides a high quality street elevation in a relatively cost effective manner.”

Maccreanor that says that an important design goal for the practice is that when finding inspiration in traditional London buildings, they get the balance right between respect and pastiche. “We’re not aping anything historical but we’re also not averse to doing things that have a historical reference,” he explains. Referring to the mansion blocks he says: “Particularly with these two we were really looking at that typology of mansion blocks that was very common over large parts of London.”

Despite brick’s resurgent popularity, alternative cladding materials are still widely seen. Maccreanor insists that while they

occasionally consider alternatives for commercial projects, their practice won’t use anything other than brick when it comes to residential developments. “I think the reason we use brick is that it’s the most sensitive choice,” he says. “For people who buy apartments it’s generally the biggest investment they’ll make in their life, and it has to look good and weather well.”

All of the brickwork was completed by Lee Marley Brickwork, with whom Maccreanor Lavington have a good working relationship. “What you see when you give bricklayers something a little bit more challenging is they like it, because actually it can be pretty boring building a big wall that’s totally flat!” Maccreanor says. “They like a degree of complexity, many of them are very highly skilled so I think generally they prefer to have a little challenge in their work.”

The Elephant Park development is one of 18 projects worldwide to be part of the Climate Positive Development Program, which looks for the world’s greenest urban regeneration projects to act as models for future large city developments. As well as solar panels and the CLT-constructed houses, water sensitive urban design (WSUD) has also been considered, managing groundwater and the reuse of water.

Brick may not immediately spring to mind when considering sustainable materials, but Maccreanor believes the material has a better sustainability case than many accept, on longevity grounds. “I think the sustainability aspect is just that it requires very little maintenance and it will be there a long time,” he explains. Referencing the demolition of the Heygate Estate he says: “The construction standards in the 1960s were poor, maintenance has been very poor, so it’s right that these projects have to come down but you displace communities. If you have solid brick projects, there’s no reason why they can’t be there for hundreds of years so then you’re also building communities. 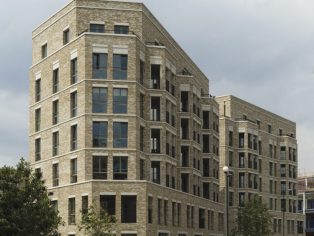 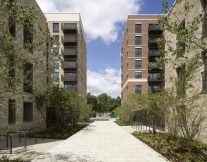