The new leadership at Race Cottam, which specialises in the health, schools, university, energy and waste sectors, will be spearheaded by long-serving director David Speddings, who succeeds company co-founder David Cottam as managing director.

Joining David on the company’s new board of directors will be Laurie Cottam, who will take the lead in the company’s civic, public sector and commercial projects, and Pauline Lake, who is responsible for business development and specialises in the school sector.

The changes come on the back of a period of sustained growth for the practice, which was established in 1993. Recent projects include the University of York’s landmark International Pathway College, development of the UK’s first integrated cataract unit at Sheffield’s Northern General Hospital and the final commissioning of North Yorkshire’s Allerton Waste Recovery Park near Harrogate.

“It’s an honour for me personally to be succeeding David Cottam as managing director.”

“Having spent such a large portion of my career at Race Cottam Associates, I’ve learnt an awful lot from David and owe him a great deal for helping shape my progression.”

“I’m delighted to be joined on the new company board by Laurie and Pauline.”

“Together, we will work to build on the solid foundations that David and Peter Race laid down almost 25 years ago – foundations which have seen the business grow from strength-to-strength.”

“We have significant and exciting projects in the pipeline and we’re extremely excited to be leading Race Cottam into its next generation.”

Co-founder David Cottam, who as part of the new management structure will take on a more strategic role, said:

“I’m very excited at the direction the business is heading following a period of sustained growth and success.”

“Race Cottam Associates is in safe hands. David Speddings and I have worked with Pauline and Laurie closely in the build-up to this announcement and are confident in their complementary abilities and their strong commitment to take the business forward into the next period of its development.”

“This is part of a planned strategic transition for the business which we have been working on for three years – and although I will remain on the board for the foreseeable future I am, to use a well-known phrase, ‘handing over the reins’.”

Race Cottam’s management restructure comes as the company is set to celebrate the anniversary of its 25th year in business in June. 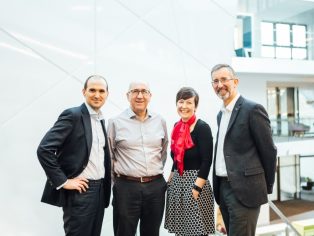