Heart of Kent Hospice thought they’d have to ‘park’ the idea of creating a new car park until new neighbours Redrow stepped in.

Redundant buildings have been demolished at the hospice in Aylesford freeing up much needed space to create a new car park, which the housebuilder is now constructing free of charge. It’s estimated that the work carried out by Redrow will save the charity around £30,000.

“We rely on the generosity of the community to donate time, money and expertise to the hospice to enable us to care for people with life limiting illnesses. We’re extremely grateful to our newest neighbours Redrow for their assistance in carrying out the demolition works and creating a new car park.”

Redrow carried out the demolition works at the hospice while demolishing former NHS buildings on neighbouring land surrounding Preston Hall.

“We’re building 172 new homes close to the Heart of Kent Hospice and so as good neighbours we were happy to be able to lend some practical support to such a worthy cause. It was a great way to follow up fundraising during Redrow 40th anniversary celebrations, which raised around £19,000 for the hospice.” 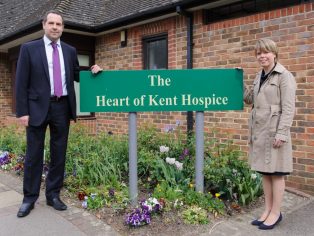