The firm, along with principal stone contractor Stone Central (NW) Ltd, received a commendation certificate in the New Build – traditional style stonemasonry category at a ceremony organised by the Stone Federation and held at London’s Hotel Russell on Friday 5th December 2014.

The Riley Sixth Form Centre at Bolton School was constructed to a striking contemporary design and provides co-educational recreational and private study work areas. With a heritage of single-sex teaching and separate facilities for Sixth Form students, the project provided the first ever mixed-sex facilities in the school’s history, which dates back to the early 16th century.

“This project is one we are particularly proud of, so we’re all really pleased to have won this award. The intention was always to create a contemporary sixth form centre but the immediate proximity of the listed buildings was a potentially challenging aspect of that brief because we had to both respect and complement the existing fabric. The solution was to provide a clean modern and simplistic design that provided a focal point upon arrival at the school and made a clear statement that Bolton School provides exceptional facilities, as well as outstanding education.”

Cassidy + Ashton specified the same red sandstone, which was closely colour matched to the original building to create continuity across the estate.

“The red sandstone is a theme that runs through the entire Bolton School campus and years from now the three projects designed by Cassidy + Ashton will look very much like a suite of additions to the school and an inherent part of its built environment.” 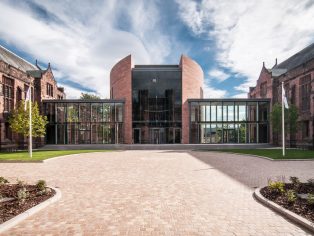