Murphy announces its Graduate of the Year

Murphy and Sons has announced the winner of its 2015 Graduate of the Year award.

Joseph Allen, a graduate civil engineer from Golborne, was presented with his accolade by CEO Steve Hollingshead at the recent staff roadshow at Wolverhampton Racecourse.

When a landslip at a railway cutting at Harbury closed the crucial north-south mainline, Murphy was called in to remove 350,000 tonnes of material, re-profile the cutting and carry out extensive repairs to associated infrastructure.

Throughout the project, Joseph stood out for his contribution, initiative and positive attitude.

On receiving his award, the graduate said:

“I was delighted and honoured to be named Graduate of the Year. The Harbury job was a challenging project to work on but its success is down to the entire Murphy team on site together with the input of Network Rail and the designers.”

Joseph went above and beyond what was required of him both on and off site, showing initiative and drive. Working with designers and site operatives, he introduced a GPS system that linked to a bulldozer and several long reach excavators to help maximise their efficiency.

The graduate civil engineer also contributed his time to attend the local village fete and led site visits for local schoolchildren and residents to allow the locals see the scale of the works and win the community’s support.

This year’s runner up was Anna Dateshidze, a London-based mechanical engineer, who worked across the country with high profile clients such as National Grid and SSE (Scottish and Southern Energy). Anna has been instrumental in introducing new software that has helped her team improve the way they work.

Rob Houghton, group head of learning and development congratulated Joseph and Anna on their achievements:

“The quality of this year’s entries to our Graduate of the Year competition made judging very difficult, but it goes to show the wide-ranging talent we have in Murphy.

“Joe and Anna are really deserving of their awards and I look forward to watching their Murphy careers develop in the years to come.” 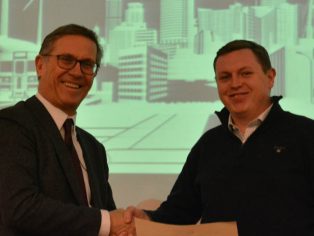 CEO Steve Hollingshead and Graduate of the Year, Joe Allen