A three-day closure of Cannon Street, Charing Cross, Waterloo East and part of London Bridge came to end at 4am this morning (Tuesday) after a long weekend of major improvement work.
The rebuilding of London Bridge station and the tracks around it are an important part of the £6.5bn Government-sponsored Thameslink Programme and work connected with that aim meant that no trains could run to or through the northern – high level – side of the station over the long weekend.

“This was another vital – and busy – weekend for us and we appreciate passengers’ patience in bearing with us while we do the work.

“Regular commuters will see that the former platforms 5 and 6 have been demolished, leaving room for the station construction team to move in and crack on, and the track has been dug up and repositioned, giving Charing Cross trains a different path through the station. In addition, this weekend a bridge carrying trains over Joiner Street – better known as the pedestrian entrance to the station from Tooley Street  –  has been jacked up and set down on new supports, increasing the strength of the bridge to cope with increasing numbers of trains.”

The timelapse footage shows the work to demolish the old platforms and move the track over. When complete, new platforms will be linked to a massive sub-surface concourse with lifts and escalators, improving the station for the 145,000 people who use it every day. 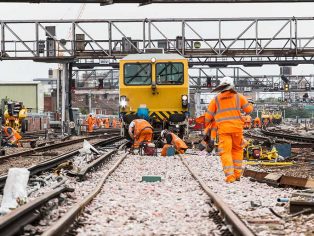 London Bridge - signal engineers at work before tamping can start