Modelling system set to be ‘next Lego’

A modelling system first designed for architects has been dubbed ‘the next Lego.”

Arckit was invented as a tool for designers but has jumped across to the education market after it became a word of mouth hit with youngsters.

Now it’s for sale in shops including Harrods and Barnes & Noble – as well as online through stores including Amazon.

The product was invented by architect Damien Murtagh after he decided to offer his clients 3D models rather than computer imagery.

“Architects used to make models back in the old days using card and glue but all that died a death with the rise of computer graphics.

“Nowadays almost all architects show their designs to clients using computer software. It’s fine but it does require a bit of vision and imagination to picture it in three dimensions.

“So I thought there must be a way to use new technology to develop a reusable three dimensional modelling system which clicks together and doesn’t require gluing.

“I started to experiment with prototypes and eventually I came up with a modular system which can continually evolve, letting you build models of pretty much anything and everything.” 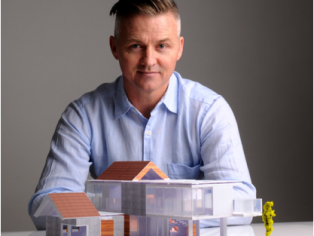