Barratt London has appointed McLaughlin & Harvey as the main contractor for the new tennis club designed by Hopkins Architects, which will include four clay courts, one junior court and four covered tennis courts with a bespoke tent style canopy roof.

A new club house with a lounge, café and meeting room will be built on site. The new facility will also have 26 secure cycle racks and 41 car parking spaces for members to use.

“We are working with the very best architects and contractors to ensure we deliver a state-of-the-art facility that will not only meet the high expectations of Chandos Tennis Club’s existing members, but attract new players from across Barnet. Hopkins Architects designed both the London 2012 Velodrome and the Lawn Tennis Association’s National Tennis Centre, whilst McLaughlin & Harvey worked on the redevelopment of Tollcross International Swimming Centre used during the 2014 Commonwealth Games. Throughout its long history, Chandos Tennis Club has produced 16 Wimbledon qualifiers and we hope that the new facilities will help us uncover Barnet’s answer to Andy Murray.”

“We are delighted that the long journey to secure the future of Chandos Tennis Club is coming to a very successful end. Our thanks to Barratt London and all the other parties involved for their efforts in designing and delivering such an outstanding facility. This result is a win for our club and for the wider community. We look forward to moving to East End Road before the end of this year and to welcoming existing and new members to Chandos.”

“We have a long track record of working on sports and leisure facilities across the country and we are enjoying delivering a project which is so important to North East London. We are also tremendously excited to be embarking on our first project with Barratt London and delivering a facility which the client and local community can be proud of.”

Chandos Tennis Club is currently located on the edge of the Hampstead Garden Suburb.  It was announced in October 2011 the tennis club would relocate to a purpose-built facility along the East End Road in Barnet following planning approval for Barratt London’s new development of apartments and family houses on the site which the tennis club presently reside upon.

Preliminary works have started on site and the new Chandos Tennis Club is due to open to its members in the winter of 2015 with special access now available for local schools and children. 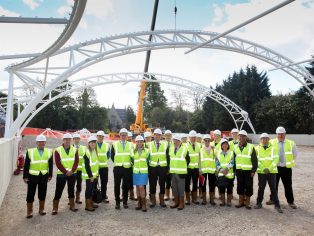