It’s a special occasion for anyone when they move into a brand new home, but one Redrow customer chose to mark it with an extra sense of ceremony.

For when Robert Denne moved into his new two bedroom Nailborne property at Somerhill Green, Tonbridge, it was officially ‘opened’ by His Worship The Mayor of Tonbridge and Malling, Councillor Owen Baldock.

“The Mayor, who is a personal friend, was my councillor for the Castle Ward and I used to see him at civic functions from time to time. I happened to say I was moving and buying a newly built Redrow home, and asked would he care to do the official opening.”

“To my delight he agreed and came to open my home when I moved in.

“There is going to be a plaque erected to mark the event so I am looking forward to that event.”

Robert first viewed the Kent development in August last year with his eldest daughter and grandson and decided that it would be perfect for him after making the decision downsize.

Due to his health Robert wanted to move from his Victorian house and thought a smaller, maintenance-free property would be ideal.

Robert four years ago from his career at the renowned Tonbridge School, where he was responsible for the day-to-day running of the £7.5 million restored chapel. He said,

“I needed a stairlift to be fitted but the stairs in my old home were frightfully steep which meant I couldn’t have one installed.”

His family had been builders and contractors in Kent for more than 200 years – well-known Messrs G.H. Denne & Sons Ltd. Among many contracts they rebuilt the library at Canterbury Cathedral after it was bombed in World War II. G.H. Denne & Sons also had a contract when war was declared to remove all of the valuable stained glass windows from the cathedral and store them in the crypt (there were builders lorries driving through the great west door to the crypt, which as a mammoth task)

So when Robert was looking for a home to meet his needs he knew exactly where to go and Redrow offered this. He added:

“I chose a Redrow home because they are properly built, solid and sound.”

“I wanted a home that was easier to maintain, but I did make some alterations. For example, I can’t get into a bath so I asked for a power shower instead, and I wanted a living room that had a central feature and Redrow helped me choose a fireplace, fire and mantelpiece. I hope to get a stairlift installed which will make it easier for me to get upstairs.”

“I enjoy my new home. It is so cosy but still spacious, both bedrooms are doubles. I look out onto the most beautiful horizon of trees and gardens beyond. It is so economical to run, I already know I’m going to find great savings with heating and electricity. I’m extremely grateful to Redrow for building me a good house.”

Somerhill Green offers a range of properties for sale, with three and five-bedroom properties currently available from £304,995.

The show homes at Somerhill Green on Tudeley Lane are open daily from 10am to 5.30pm. 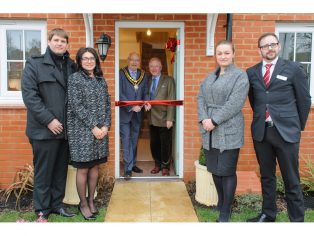