New homes officially launched by the Mayor of Basildon will bring investment worth more than half a million pounds to the local area.

Award-winning Redrow Homes (Eastern) acquired land on Ballards Walk from Basildon Council to provide much-needed new homes for the borough. Known as St Nicholas Mews, the development will eventually feature more than 100 properties, including 25 that will be handed back to the local authority as affordable housing.

Redrow invited Mayor of Basildon Borough, Cllr David Harrison to perform a ribbon cutting ceremony to celebrate the opening of a show home at the development at a VIP launch event.

“I was pleased to open the show house at Redrow’s St Nicholas Mews Development, and see first-hand a model of how the completed development will look.”

“Construction work at St Nicholas Mews started at the end of last year and we’ve since made great progress with the development. The launch of the show home is a cause for celebration, as building new homes is a real boost for the local economy. We’re not only helping to address the housing shortage, but also providing jobs, supporting businesses in the area and making significant contributions to the surrounding community. These will benefit those already living in the area as well as our customers, for many years to come.

“We’ll be investing more than half a million pounds in facilities in and around Basildon.  Schools and health services will benefit, plus we’ll make a donation to the community hall and create a new play area.”

In addition to its investment in the community, Redrow has adopted St Luke’s Hospice as its charity of the year, raising more than £31,000 to date.

The housebuilder is also helping provide homes for nature by donating bird and bat boxes, bug shelters and wildflower seeds to schools near its developments.

The first homes at St Nicholas Mews were launched ‘off plan’ in March with 15 properties sold before the show home opened.

Redrow has also started work on another development in Basildon – Westley Green on Dry St.

The housebuilder has planning permission to build 181 homes on a 14 acre site, part of plans for a wider development of up to 725 homes, which will also see Redrow invest in the local community with plans for a new primary school and public open space.

Properties there won’t be released for sale until next year, but in the meantime St Nicholas Mews will offer a choice of three and four-bedroom homes.

For more information, including opening times, visit the company website or call 01268 971156. 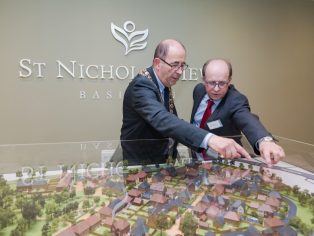