FaulknerBrowns Architects and Proctor & Matthews Architects, with specialist input from MawsonKerr Architects and landscape architects Camlins, has announced a collaborative masterplan design that will reinvent the heart of Sunderland while drawing on its industrial heritage.

Designed for Sunderland City Council and their development partner igloo Regeneration, the masterplan sets out the revival of a 33.2 hectare site on both sides of the River Wear, creating the UK’s first carbon-neutral urban quarter, building 1,000 new homes with community facilities and social infrastructure for a population of 2,500 and creating various workplaces for up to 10,000 people. Riverside Park will be the focal point of Riverside Sunderland. With a land area of 13.7 hectare and a water space of 5.3 hectares, the park accounts for approximately half of the total site area. The upgraded St Mary’s Boulevard will also reconnect the park to the city and new bridges will connect communities on the north and south banks of the river.

The masterplan, lead jointly by FaulknerBrowns Architects and Proctor & Matthews Architects – with each practice having responsibility for the mixed-use and residential districts respectively – is sub-divided into five urban quarters: Vaux, Sheepfolds, Farringdon Row, Heart of the City, Ayre’s Quay. Bound together by the re-vitalised Riverside Park. Their approach begins with the Riverside landscape, its extraordinary topography, history, bio-diversity and cultural resonance. The masterplan aims to maximise the drama of “living on the edge”, with views of the river, the gorge and abundant green space. The restoration and re-invention of a built edge on the cliff tops overlooking the river will create a signature silhouette for the city.

Four of these city quarters will be mixed-use residential neighbourhoods designed by Proctor & Matthews Architects, each with a distinctive character. Together, the design team has developed three exemplar house types based on local and regional antecedents, including the much-loved Sunderland cottages, Pele House Apartments and Wearside maisonettes. These house types have been designed specifically for the site’s topography, where they will provide a strong and distinctive silhouette and make the most of riverside and green space views whilst aiming to achieve a harmonious connection between built form and public realm, and to promote sociability and neighbourly interaction. Sunderland City Council is developing an ambitious plan to achieve carbon-neutral status, meaning homes will be energy efficient, built using modern methods of construction (MMC), and will promote the use of renewables and smart energy networks.

The first of the four residential neighbourhoods, known as Vaux, is being developed by Proctor & Matthews Architects and local practice MawsonKerr Architects to include a total of 126 homes. A mix of three- and-four storey terraced houses combined with contemporary maisonettes and six-storey Pele House apartments positioned in key locations will be available, inspired by historic precedents.

The masterplan also includes one million square feet of varied and flexible office space in a new central business district (CBD). The CBD will bridge the gap between the historic city centre and the riverside community and re-establish the city centre as a successful and dynamic business location. Located here is the new Sunderland City Hall, designed by FaulknerBrowns Architects — headquarters for the City Council but also a public access point and civic events space.

Bringing a cultural dimension to the masterplan, two new flagship attractions are also planned. The Culture House represents a new generation of modern libraries. Packed with supportive environments for making, creating and innovation, the building celebrates Sunderland’s rich heritage and its distinctive intellectual, industrial and cultural contributions to the UK, past and present. A new arts centre, by Flanagan Lawrence, will see the restoration and repurposing of the iconic and locally loved 1907 Fire Station as well as the restoration of two Grade 2 listed public houses to create a new performance venue.

The first wave of projects is underway, including the construction of a new City Hall, and the 450-seat Auditorium, part of the Fire Station arts complex. Work will start soon on the 120-room Holiday Inn in Keel Square and a planning application has been lodged for two new buildings in the central business district that will create 200,000 square feet of modern office space.

“In collaboration with Proctor & Matthews Architects, we have proposed an inclusive extension of the northern edges of Sunderland city centre with a strong emphasis on social, cultural and environmental wellbeing. The goal has really been to create a city that people want to move to and live in with their families. More than ever before, skilled workers and organisations pay attention to rewarding living, working and recreational environments and we have put this central to our vision.”

Like many UK cities, Sunderland has shifted to a post-industrial economy and is in the process of redeveloping its old industrial areas – these sites are often the city’s face to its river and thus have a tendency to shift the regeneration focus towards the waterfront. At Sunderland, we wanted to connect the riverside to the city centre. Placing a strong emphasis on amenity and local distinctiveness, we have pushed to create a masterplan that reinforces the city core with diverse and worthwhile uses blended with a residential agenda that hosts life locally and self-sufficiently.”

“The Riverside Sunderland Masterplan creates a framework for development and placemaking which captures the Wear’s unique topography within the heart of the city centre and will create a vibrant 21st century urban quarter. Avoiding the ubiquitous perimeter block model which has become the default position of many recent urban city plans, Riverside Sunderland looks more carefully at the city’s historic patterns of development to create a new hierarchy of streets, squares and mews, providing active spaces for social interaction. Drawing on the dramatic industrial silhouette of the past, the masterplan looks to create a new distinctive edge profile to both banks of the River Wear.”

“Working with a team of exceptional calibre it is timely to see how a future focussed urban realm will be created in this quarter of the city. The site has a challenging topography and deep historical connection to Sunderland including riverscape park that demands a strong design response. Harnessing the vision of the council to create new sustainable communities is something we welcome and will greatly benefit Sunderland for generations to come.” 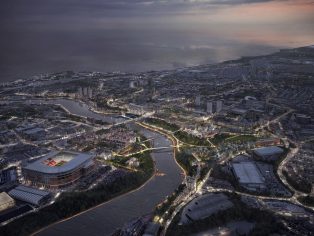 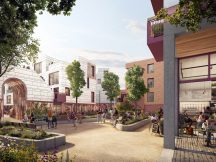 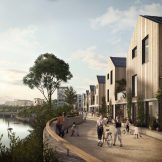 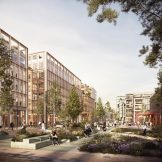 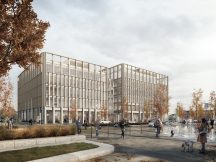 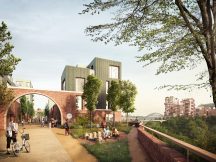 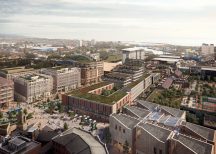 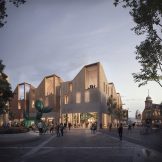 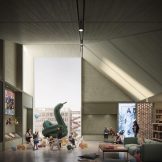 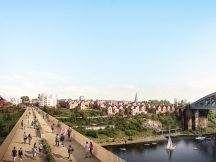 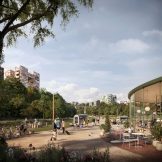 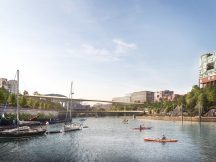 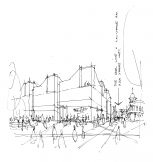 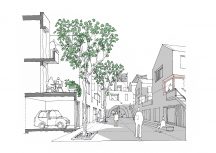