The project required new openings to be created through the reinforced concrete slab to provide space for services and a new lift. Before cutting the openings, the slabs needed to be strengthened to redistribute the loads around the hole which meant designing for increased flexural loads and, where the holes were close to columns, also designing for punching shear. A feasible solution was proposed by Mapei, which included the use of Mapewrap C Fiocco carbon fibre cord and Carboplate, a pultruded carbon fibre plate pre-impregnated with epoxy-based resin.

The proposed design was accepted by the client as a cost-effective solution. The solution was approved and adopted by the engineers, and it was implemented by Gunite (Eastern) Ltd after they were instructed to undertake the work by the Main Contractor Gilbert-Ash.

The design, where the service holes were cut near to columns, involved bonding Mapei Carboplate E170 plates to the top of the slab, with the plates on top of the slab connected into the column with the Mapewrap C Fiocco. This increased the ultimate slab deflection and improved the punching shear capacity of the slab.

Where the new lift was to be later installed, the design required a larger section of the slab to be cut out, which involved bonding Carboplate E170 plates around the location of the new lift and would therefore control the distribution of bending moments around the hole.

After the surface preparation of all the areas to receive Mapei Carboplate, holes were drilled into the junction of the column and the slab for the application of Mapewrap C Fiocco. Once the holes were drilled, Mapewrap C Fiocco carbon fibre connectors – previously prepared by cutting the cord to the designed length and impregnating half the cut length in Mapewrap 31 adhesive and allowing them to dry – were inserted into the holes leaving half the cut length protruding from the hole.

Carboplate E170 was then applied to the prepared concrete slab using Mapewrap Primer 1 and Adesilex PG1 adhesive, as per the design. First, the surface was primed with Mapewrap Primer 1 to ensure a good adhesion to the structural concrete. With the primer still tacky, Adesilex PG1 was applied to the primed substrate, and the cut length of Carboplate E170 was then offered up to the adhesive on the slab and pushed together. A hard rubber roller was then used to apply pressure ensuring that a full bond was achieved between the concrete substrate and the plate, and ensuring that any excess adhesive was removed.

The Mapewrap C Fiocco that was previously left protruding from the hole had the protective sheath removed, and was then bonded onto the Carboplate E170 using Mapewrap 31 adhesive. 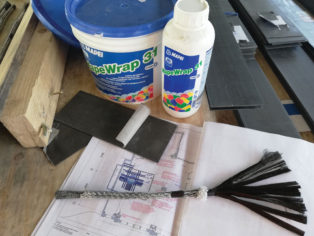 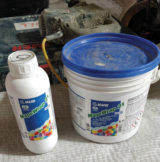 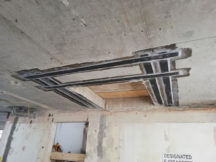