The tram stop upgrade is part of the redevelopment of Manchester Victoria station which is being delivered as part of a £1bn+ investment in the railway in the north west of England.

The redesigned and expanded Metrolink stop will ultimately allow more frequent tram services to run through the iconic city centre station as well as providing better links with the national rail network.

Network Rail will complete the work between Saturday 14 February and Saturday 21 February which involve changes to tram services through the station.

Details of the specific changes will be provided by Metrolink and TfGM at stops and online at www.tfgm.com and www.metrolink.co.uk.

“The completion of and reopening of the tram stop at Manchester Victoria is a milestone in the redevelopment of the station. To allow us to complete the work, there will be changes to tram services between 14 and 21 February and we apologise for that.

“However the result will ultimately be a better tram service with better connections to the railway as part of the stunning new Manchester Victoria station.”

“We’re looking forward to welcoming our customers back on-board at Victoria as the station’s wider redevelopment enters its final stages.

“We’ve been working closely with Network Rail to ensure this important stop reopens as soon as possible because, although there will still be a lot of construction activity in the station when that happens, it will restore key services and connections for passengers.

“There will be changes to services in the run up to the re-opening – during the traditionally quieter half-term period – and we’ll be publicising these as widely as possible.

“With such a major programme of improvements across the Metrolink system at the moment, we’re grateful for people’s patience and this is reflected in the decision to freeze Metrolink fares this year.”

The Metrolink network as a whole is benefiting from a £1.5 billion investment in new lines, new trams and stop improvements, and Manchester Victoria is a key part of the network-wide upgrade.

The Manchester Victoria Metrolink stop works and associated enhancements are being funded by the Greater Manchester Transport Fund and European Regional Development Fund Programme 2007 to 2013. 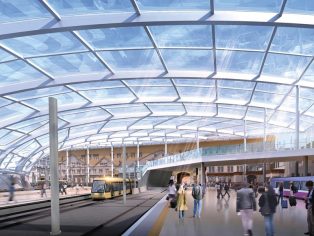