Christchurch Mansion holds the most significant collection of Constable’s work outside of London. It is the only permanent display of Constable’s work within Suffolk, the place where he was born and found inspiration for some of his most iconic works, once writing ‘ I should paint my own places best’. The exhibition includes over thirty of Constable’s paintings, drawings and sketches and features many works of the local landscape as well as the artist’s paint box and palette and portraits of his family.

Golding Constable’s Kitchen Garden 1815 and Golding Constable’s Flower Garden 1815 contain deeply personal views of the Suffolk landscape from his parents Golding and Ann’s home.  Constable never attempted to sell the paintings during his lifetime and although highly finished, they were considered to be private works and a record of the landscape that was precious to him.

Constable’s kitchen garden painting captures views out of the upper windows of East Bergholt House where he was born. It includes his father’s fields of unripe corn, the windmill where he worked when he was young, and the rectory where Maria Bicknell, the woman he loved, stayed on visits to her grandfather. The flower garden is often seen as the area most closely associated with Constable’s mother. His painting of the garden was completed several months after she died and is thought to serve as a memorial to her and to his childhood home.

A highlight of the exhibitions is Constable’s Salisbury Cathedral from the Meadows 1831, a major ‘six-footer’ oil painting and one of the greatest masterpieces of British art. The work in the Tate Collection was secured for the British public through the Heritage Lottery Fund (HLF), The Manton Foundation, the Art Fund (with a contribution from the Wolfson Foundation) and Tate Members. The acquisition and ongoing display is part of Aspire, a five-year partnership supported by the Heritage Lottery Fund and the Art Fund to enable the work to go on almost constant view across the UK. The painting depicts Salisbury Cathedral under both a heavy cloud and a striking arched rainbow viewed from across the River Nadder. The scene has been interpreted as a metaphor for political pressure felt by the Church of England as well as the emotional turmoil Constable was feeling after the death of his wife.

‘Our grant of £15.8m came with the condition that Salisbury Cathedral from the Meadows was shared in perpetuity by Tate and four partner museums, including Colchester and Ipswich Museums. Constable was truly a man of the people who believed that art was for everyone – not just the select few – and so it’s fitting that the innovative approach of the ‘Aspire’ project is helping many more people around the country see and enjoy this precious Constable painting.’

‘We are delighted to be celebrating the bicentenary of two treasured artworks in the Ipswich collection alongside loans from Tate, V&A and the Fitzwilliam Museum.  The exhibition will give visitors the chance to explore Constable as a person through the people and landscape that meant most to him.’ 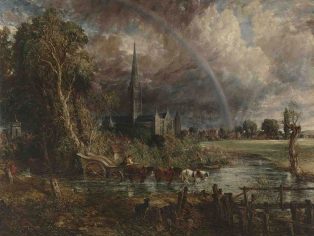