Leicester and London-based multi-disciplinary architectural practice, rg+p Ltd has received a coveted ProCon Award 2016 for a highly specialised building project in the heart of the historic and multicultural city where the practice was founded over thirty years ago.

The £2.9m project, on the former Charles Keene College Annexe site at Abbey Park Street in the Belgrave area of the town, was designed on behalf of Radha Soami Satsang Beas (RSSB), a philosophical organisation which has headquarters in Bedfordshire and required a permanent home for its Leicester meeting space relocating from rented premises in Knighton. It also needed to accommodate an associate organisation, Science of the Soul (SOS) to host core activities, including meetings, seminars, lectures and spiritual teachings.

Having purchased the site, RSSB appointed rg+p to provide advice on suitability of design, make an application for planning and post planning advice on construction. Originally Abbey Park Junior and Infant School and now a listed building, the redevelopment of the site was sensitive and included detailed plans and negotiations surrounding the revitalisation of the site and the preservation of elements of the listed building which had been a schoolhouse since Victorian times.

Because of the importance of the existing building the rg+p team worked closely with the conservation department at Leicester City Council together with specialist structural engineer Bob Kumar, eventually producing an Archaeological Heritage Statement for the site.

To enable the provision of the 750 seat lecture hall ─ which now has two floors and an adjacent 3-storey pre-meeting annex ─ together with parking expansion for 76 vehicles, some dilapidated post-war buildings were demolished. The retained school buildings were then refurbished and adapted for ancillary use including further offices, toilets, catering and a crèche. Modern glazed walkways now link the old and new buildings creating light and ease of access for all those using the new centre.

Uniquely, the building was constructed entirely by volunteers from the RSSB, under the guidance of skilled craftsmen adding an extra dimension of commitment and cohesion to the entire project.

“We’re thrilled to receive this award for what was a complex, challenging and ultimately rewarding project. I’m passionate about our architectural heritage, especially here in my hometown but it was obvious this scheme needed some bold, modern intervention to blend the past with the present. It also needed to work for the community investing so much time, money and effort into what is essentially their new home.

“The building faces onto Belgrave Circle roundabout and called for a strong statement to be made, this was achieved by utilising a large glazed façade. Internally, the expansively glazed circulation areas in particular, whilst designed to allow attendees to mix before and after lectures, afford spectacular views of either the city sky-scape or the scheme’s tranquil gardens.”

The RSSB Building enjoys the spectacular backdrop of The Wolsey Building and Abbey Mill – both award-winning refurbishment schemes undertaken by rg+p in the recent past – resulting in an eye-catching, architectural statement for the whole area, stamped with rg+p’s indelible professionalism and style.

rg+p received the ProCon Award ─ which is voted for by the general public and the professional membership of the construction group ─ for small, non-residential scheme. 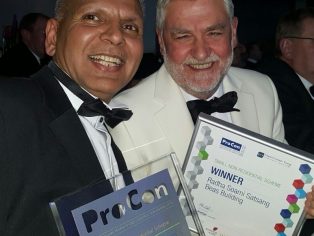