Ambitious plans to transform Paris into an Olympic Park for the 2024 Olympic and Paralympic Games were officially approved by the International Olympic Committee (IOC) today when it (IOC) named the French capital as the host of the 2024 Summer Olympics.

Populous, the International sports and entertainment design practice, and Egis, the Paris-based, international consultancy, engineering and operation group, were chosen in 2016 to collaborate on the Paris 2024 bid and have provided the necessary technical expertise and assistance required to develop plans for no fewer than 38 Olympic and Paralympic venues spread across Paris.

The winning concept of Paris as an Olympic Park will see Olympic and Paralympic events take place against the spectacular backdrop of Paris’ historic buildings, streets and landmarks including the, Champs Elysees and River Seine as well as beach volleyball at the foot of the Eiffel Tower. The Games will build on the history and identity of Paris, as well its experience in hosting the climax of the world-renown Tour de France, to create an unforgettable experience.

The architectural design for both new and temporary venues and facilities will seek to shape and integrate sporting spectacles in the city’s urban landscape whist supporting Paris 2024’s commitment to be the most sustainable Games ever.

As part of the bid, Populous and Egis have worked in association with ISC, a sport and culture consulting agency on plans to ensure the existing venues are ready for the scale and needs of Olympic and Paralympic events.

Populous’ involvement with Paris 2024 takes its overall major events experience to 13 Olympic and 7 Paralympic Games including Sydney 2000, London 2012, and Rio 2016. Populous is also the only firm to have designed 3 main Olympic stadiums. It advises on the full design and delivery spectrum, from assisting bid teams with submissions, helping masterplan the major venues and facilities, to the design of the main stadium and hundreds of temporary venues needed to support modern Games.

“We are proud to have played a part in the successful Paris 2024 bid.   Bringing people together to enjoy an unforgettable experience is the overriding ambition of Populous in all that we do and is at the heart of the Paris 2024 vision. The city of Paris will be a magnificent Olympic Park and transforming some of the world’s most beautiful and historic sites into temporary stunning stages for sport will provide unforgettable images around the globe.”

“Paris is one of the leading cities of the C40 focusing on tackling climate change while improving the health and wellbeing of its citizens. Paris 2024 will share with the world an unforgettable and emotional Olympic and Paralympic Games anchored in the core values and ideals of the IOC. Populous was delighted to be part of the team turning Paris into an elegant and connected Olympic Park ,delivering stunning venues in one of the most prestigious World Heritage sites. Under Agenda 2020, Paris 2024 shares the rings of success with LA 2028 for a better Olympics and Paralympics Games in a better world.”

Egis’s experience in sporting venues includes its contributions to major projects such as the construction or renovation of most of the host stadiums used during the 2016 UEFA European Championship: the Matmut-Atlantique stadium in Bordeaux, the Geoffroy-Guichard stadium in Saint-Etienne, the Allianz Riviera stadium in Nice, the Velodrome stadium in Marseille, and the Pierre-Mauroy stadium in Lille. Outside France, Egis is also involved in several other sports facilities such as the “Stade du 5-Juillet” and the Baraki stadium in Algiers, Algeria; the Olympic stadium in Istanbul, Turkey; stadiums in Marrakech and Tangiers in Morocco, and a stadium in the Middle East.

“Our Group is proud to have taken part in this Olympic and Paralympic Bid adventure. Our consulting teams have contributed all their expertise, their anticipation capabilities in technical and organizational issues and their project management know-how to help to bring the 2024 Olympics and Paralympics to Paris. Egis is an international group with extensive and long-standing experience in designing major sports complexes and sports events. Thanks to the multiplicity of its skills and its cross specialization processes, Egis is now recognized as a major player in the engineering of stadiums and the organization of major events.”

Diogo Taddei, from Egis, who supervised the work of the consortium, said

“Our mission was to understand how each sport and discipline could best function in existing venues, new buildings when required as legacy and temporary modular sites, identifying the best option in each case. One of the biggest challenges was to transform illustrious Parisian monuments into sports venues, adapting them to the requirements of the Olympic and Paralympic Games.” 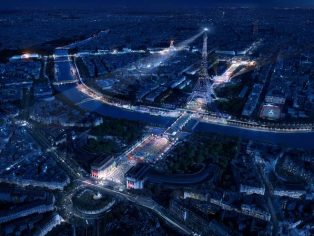