When it comes to views from your window, they don’t come much more prestigious than No 1 Palace Street which affords residents stunning views over the gardens of Buckingham Palace from the front of the historic listed building. With this in mind, arguably the fenestration on this project is one of the most important elements of the development as well as one of the more complex when taking into consideration the requirement to retain the facade of the building. Retained facades and the design and installation of the windows for them is not a straightforward mix and each project we come across throws up different challenges. A fusion of styles spanning Italian Renaissance, Beaux Arts, French Renaissance, Queen Anne and today’s 21st century contemporary design and build requirements, the seamless  blending of old with new at No 1 Palace Street is something George Barnsdale is increasingly becoming known for.

Having worked with the developer Northacre Plc on one of their other prestigious projects The Lancasters ,  which is also a listed building with a retained facade, George Barnsdale was delighted to be entrusted with manufacturing and installing the timber windows and doors for this latest exclusive development beside the most famous of Royal palaces. Working directly with the contractor Balfour Beatty Plc, George Barnsdale supplied and installed 282 timber windows and 181 timber doors over a lengthy and complex project which has seen changes in contractor and architect personnel along the way.

From the early stages of the project,  it was evident that it would be complicated with five different buildings on the site and lots of variations in glazing types throughout which tested the depth of the team’s acoustic knowledge to the full. Led by Stephen Wright, the Barnsdale team attended numerous design meetings to overcome the challenges of the project including the design of highly bespoke doors with a high level of tested acoustic, thermal and weather performance. Commenting on the project Stephen said “We are usually able to avoid the need for additional performance testing since we have so much of our own data already, but in the case of the doors on this project we did have to do additional testing to guarantee performance since they are unlike anything else we have manufactured.”

During the planning meetings as the project progressed multiple discussions took place between the architect and the Barnsdale team to agree the best way to deliver the design intent whilst balancing the function and performance of the products. As with any projects, there is often a conflict between the architect’s vision and the practical delivery, but we worked hard to achieve the best of both.

As the plans and technical specifications developed, the surveying team spent a lot of time on site measuring the old openings which were anything but standard and taking this back to the technical team to incorporate into the designs as well as the comprehensive installation details.

Commenting on the project, Vic Polydore, Technical Engineer said: “There are probably only four different item types but the variations in openings meant that, even if the design was agreed and confirmed, the interface details were completely different in most areas. An example of this was the first drawings that were submitted for Buckingham Gate external facade which consisted of four individual drawings. When it came to adding the “real life” wall interfaces, we would have had to increase to about ten drawings and that is for just one facade. Instead, we have a simplified process that includes  “type drawing”, interface details and schedule, which, when read together, makes things much more straight forward.”

The windows themselves are a mix of around 270 Historic sliding sash windows, 10 dormer windows (3 of which are curved), 2 pivot windows, 179 inward opening tilt and turn doorsets (9 of which are curved) and two inward opening doorsets. Those windows at the front of the building had to be single glazed in order to meet the requirements of the Conservation Officer, whilst retaining high performance levels.

When it came to the manufacture of the timber windows and doors, due to the size and weight of the products, it was necessary to supply the frames, sashes and weights separately to be installed on-site. When combined together some of the sliding sash windows weighed 350 kilos. The use of 24mm acoustic glazing meant that the production team had to use cranes in the factory to move large pieces of glass around as well as the thick 68mm sashes designed to accommodate such glass. Our most skilled craftsman worked on the intricate curved work on the heads and cills of some of the windows and inward opening tilt and turn doors.

“These are not run of the mill items,” said Darren Templeman, Production Director, “We had to be really creative at times, both in terms of processes and technique. The bespoke machining for the enhanced security and electronic contacts are two examples of this. ”

On site, one of the biggest challenges for the Site Manager, Ian Wright was how to manually handle the windows and doors.  Commenting on this, Ian said: “Usually, we would use floor cranes, but this wasn’t possible due to the uneven floors and the steel beams in the ceilings so we had to improvise and find ways to lift them manually.”

A further complexity came with the amount of refurbishment work being done on the stonework by Paye Stone and Restoration which we had to work around, making our own scheduling a bit of a nightmare at times. Ian continues: “Some days we only managed to get five windows in on one floor, missed some out and had to move elsewhere which isn’t the most efficient way to schedule a job, however this is often the nature of working on historic projects like this.”

In addition to this, arranging delivery and cranes to be available in such tight spaces outside is typical of historic projects like this.

Having a single supplier for timber windows and doors proved beneficial for Balfour Beatty in terms of reducing the hassle of managing multiple suppliers, the financial aspects, on-site issues and  the design elements. In the past, windows and doors have been bundled into a broader joinery package, but since these joinery companies lack the technical skill to deliver fenestration on projects like this, they would use subcontractors which keeps the people with the expertise away from the design and decision making processes. Tom Wright, MD at George Barnsdale said “The fact that we were able to be involved in the design and planning meetings meant we could spot in advance any potential issues, point them out and come to an agreement with the wider team and architects on how to mitigate them. This is the optimal way for us to work on complex commercial projects like this, the earlier we are involved, the better the outcome.”

A further plus for Balfour Beatty was the financial stability of George Barnsdale because contractors can find themselves in a situation where they have to prop up suppliers when finances become troublesome. Our approach to sustainable business planning and finance is often seen as beneficial to customers on lengthy commercial projects such as this one

Overall, George Barnsdale’s competence and ability to lead a project like this is very important. From measuring and designing windows for openings that are old and often all over the place, to changes in personnel resulting in potential miscommunication, it is down to the excellent project leadership, experienced design oversight and comprehensive record keeping  of the team members that any glitches were overcome. 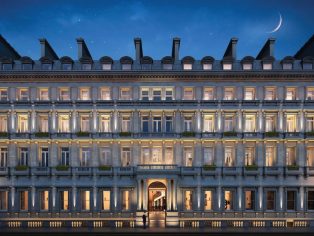 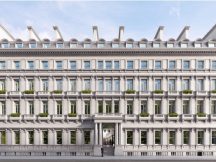 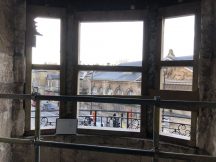 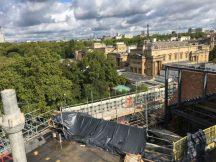