The Mayor of Lewisham, local MP Heidi Alexander, The Deputy Mayor of London for Housing, Land and Property and housing association L&Q joined their voices to a nationwide campaign to end the housing crisis within a generation yesterday, supported by Betsy, the Homes for Britain-branded bus.

A relay which started in Land’s End in February has seen a giant Homes for Britain house- key passed from one housing organisation to another as people walk, run, bike and bus ride towards the capital. The Relay is due to finish with a national rally in Westminster on the afternoon of Tuesday 17th March.

L&Q’s CEO David Montague took up the giant house-key from Betsy the Homes for Britain-branded double-decker bus at the new Thurston Point development in Lewisham. Thurston Point is one of the largest developments of new homes for rent on the open market currently being built in London. Alongside the 238 homes being developed for private rent are 162 affordable homes for social rent and shared ownership which are supported by The Mayor of London.

Deputy Mayor of London for Housing, Land and Property, Richard Blakeway added his voice to the campaign at Thurston Point today. He said:

“With London now home to more people than ever before and set to break through the 10 million people mark by the early 2030s, building many more new homes of all tenures is our most pressing need. At City Hall, we are doing our utmost to stimulate housebuilding including accelerating supply through 20 housing zones and a housing bank to support low cost homes for rent through loan funding. The Mayor is on track to deliver 100,000 affordable homes over his two terms, with over 85,000 already completed. Despite this success, there is still plenty of work to do and campaigns such as this rightly help push all organisations involved in housebuilding to do even more.”

The Mayor of Lewisham Sir Steve Bullock, local Lewisham MP Heidi Alexander and the CEO of L&Q David Montague met Betsy the Homes for Britain-branded bus at Ravensbourne Park to celebrate the regeneration of the area following Lewisham’s stock transfer of 3,500 homes in Catford, Rushey Green, Sydenham and Forest Hill.

“I am delighted to support the Homes for Britain campaign. Housing is one of the most important issues for local people, and by backing this campaign we are further demonstrating our commitment to build at least 500 new council homes directly as well as delivering 2,000 new affordable homes along with our partners in Lewisham by 2018. It is absolutely essential that the provision of good quality affordable housing remains one of our top priorities and I support any campaign that helps us to do that”.

“My constituents tell me that the lack of genuinely affordable homes is one of the most important issues they face. London’s housing crisis has a devastating impact on far too many people. I support the Homes for Britain campaign as it’s critical that we do all we can to ensure the next generation are able to live in a decent home at a price they can afford.”

“It is heart-warming to see the high-level support there is in Lewisham and across London for this national campaign to end the housing crisis in a generation.

“As a charitable housing association, at L&Q we have grown from one house in south London in 1963 to managing over 70,000 across London and the South East today. However we know there is so much more we all need to do to help everyone access the affordable, safe, warm, high quality home they deserve, and are committed to meeting this challenge.”

Homes for Britain is campaigning for the next government to come up with a long-term plan to tackle the housing crisis within a year of getting into office. It is being backed by thousands of people up and down the country who have joined forces with organisations from every corner of the housing world.

The campaign comes at a time when housing demand vastly outstrip supply at both a national and local level. The Home Truths report shows London property prices are now 14 times the average wage – you need to be earning over £100K to afford a property in the capital.

“We are delighted that this event is taking place as part of the Land’s End to Westminster relay and that the Mayor of Lewisham and local MP Heidi Alexander are backing Homes for Britain alongside L&Q. We want people from all walks of life to add their voice, so get involved – write to local politicians, tell your friends and family, and tweet us using #HomesForBritain.” 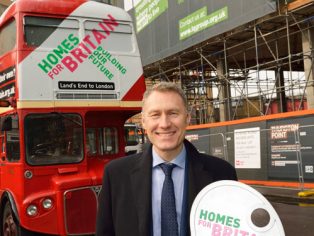