London Festival of Architecture (LFA), the annual city-wide celebration of the capital’s buildings and landmarks, continues this week with a rich and diverse programme of events and activities.

“This year’s festival has a great depth and breadth. Not only does it showcase the capital’s great architectural expertise, but also deals head on with real issues that impact all corners of our society”.

“Architecture is the cornerstone of any city, and has a profound effect on its culture community and economy. I urge anybody that cares about the future of London to get involved in the Festival and make their views heard.”

Highlights of the week include a Q&A session with critically acclaimed author Will Self, who will discuss the relationship between power and architecture (9 June); and a satirical examination of what it means to live on the outside of London by journalist and ‘In the Thick of It’, writer Ian Martin (9 June). There will also be a thought-provoking debate with architects, designers and young Londoners focussing on what the city is like for young people, and the steps that need to be taken to make it a more positive place to live (12June).

This week also marks the start of a series of expert-guided tours of recently completed projects that present practical ways to reinvigorate London’s High Streets. These visits will start at set times across eight of the capital’s Town Halls (14 – 21 June).

In addition, this week will also provide visitors with an opportunity to view a striking new pavilion at the entrance of the Museum of London – the House of Muses (6 June). This exhibition, offers visitors a chance to share their thoughts to help shape the future of the museum.

Will Self: On Architecture

Will Self is one of our foremost critical voices about London’s urban character, writing with polemical force about architecture and its power to change the physical character of the city. In this talk entitled, “When Liquid turns to Solid: the Spatialisation of Capital Flows in 21st Century London”, he explores the theme of capital in relation to new architecture in the city, followed by conversation with writer and journalist Andy Beckett and then takes questions from the audience.

The Death and Life of Great London High Street14

High streets are at the heart of London’s daily life and economy. But today a new set of challenges, including competition from online retail and shopping centres, is leading to claims of the death of the high street as we know it. London is leading the way in showing that high streets can continue to play a central role by adapting and diversifying, with over £175 million being invested by the Mayor of London and partners in projects to support their growth. Eight expert-guided visits of recently completed projects will present practical ways to reinvigorate our high streets by working with their existing character and strengths, and offer an opportunity to discuss their future life. Including projects by Peter Barber, BDP, Cartwright Pickard, Rick Mather, muf architecture/art and Tonkin Liu Architects.

Ian Martin is an acclaimed journalist and comedy writer with credits including ‘The Thick of It’, ‘The Loop’ and ‘Veep’. As part of the Royal Academy of Arts talks, he discusses how he sees London as an outsider: ‘my London is a series of goat tracks that all seem to lead to Soho’.

Peter Rees, former City Planning Officer at the Corporation of London, will talk about the continuing influence Wren has had on London since the 17th century. Describing Wren as a ‘master architect and failed planner’ Professor Rees says: “We were spared Wren’s post-fire plan for the City, but inherited viewing corridors and St Paul’s Heights. He has influenced the later planning of London in ways which are good, bad and unintended.” Introduced by Paul Finch, editorial director of the Architects’ Journal.

About a quarter of London’s population is aged 19 or under, but what is the city like for young people? This discussion looks at how architects, designers, and young people themselves can make our capital a positive place to grow up.

View from the Tower: Dinner Debate

A dinner debate exploring east London’s development in the context of the Balfron Tower, Poplar. Led by London Urban Visits with invited expert speakers and sponsored by Bow Arts Trust, the debate will investigate Modernism’s impact on east London.

Contemporary discussions about the unethical living and working conditions of the builders who construct our new urban age, and the icons of architectural celebrity, abound. Three thinkers on labour relations in the construction industry confront the theoretical, practical and the historical to illustrate and explain why understanding the labour process is critical to architecture, despite so often being obscured from architectural vision.

House of Muses is the Museum of London’s striking architectural installation designed by Gruppe, and commissioned in partnership with The Architecture Foundation. This temporary structure aims to inspire public discussion around the future development of the museum. It is conceived as a place for contemplation about what a museum could and should be. The public is invited to enter the structure and give their feedback on this topic.

An immersive olfactory installation by creative guerrilla gardening Good at Magic/Richard Reynolds, The Pungent Subway will use the comforting fragrance of herbs and flowers to change the general perception of a 55-year-old subway in Elephant and Castle, SE1. One of the seven subways will be transformed in a comforting installation, with a bed of dried lavender and bay leaves crushing under the visitors’ feet, and hanging bunches of sage and rosemary contributing to the olfactory experience. All the herbs are locally grown produce harvested from community and guerrilla gardens in SE1.

An exhibition featuring Wallpaper magazine’s selected pick of new architectural talents around the world, featured in their annual Architecture Directory issue. This year, the directory features 20 practices, spanning 17 countries and four continents. The exhibition will include a bespoke ceramic installation, sponsored by leading specialist network Ceramics of Italy.

Saint Etienne: How We Used To Live

Saint Etienne present their new film How We Used To Live, which captures a moment in London’s history – from the post-war rebuilding of London through to the onset of Thatcherism. Beautifully inhabiting London’s streets and buildings, this latest film features rare footage from the BFI archive, and a musical score by Pete Wiggs. The film will be followed by a conversation between Elain Harwood, from English Heritage, Bob Stanley from Saint Etienne, architect Charles Holland and Joe Kerr, co-editor of London: From Punk to Blair, and a bus driver at Tottenham garage.

The bike tour, a collaboration between the AA Night School and blog Love London Council Housing, will be led by Sam Jacob and Andrea Klettner. It coincides with the opening month of A Clockwork Jerusalem, the exhibition at the British Pavilion at the Venice Architecture Biennale run in association with the British Council. Its aim is to show participants a selection of housing across the capital over the last 100 years, leading to a discussion – led by a panel of experts – about London’s current housing crisis. The bike tour itself would start at London’s first social housing estate, the Boundary Estate, snaking its way to Thamesmead via a series of 1960s housing (eg. Balfron Tower, Robin Hood Gardens), Peabody/Guinness housing (eg. Bethnal Green) and new build developments (eg. Royal Arsenal, New Festival Quarter). 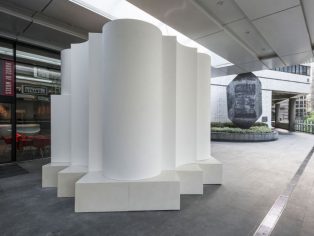