London Bridge – is it now built to last?

If only steel bridges had been around in Roman times. Maybe then London Bridge wouldn’t have had to be replaced so many times.

The Romans built the first bridge with wood. This bridge was rebuilt many times between 1077 and 1136. It was damaged by eight fires and one storm.

At that time London Bridge was the only way people could cross the Thames on foot or by horse. The person who looked after the bridge was Peter The Bridge Master. He was the Chaplain of St Mary Colchurch. In 1176 he decided a stone bridge would be a better idea. It took 30 years to complete and unfortunately, Peter died before its completion in 1209.

The bridge had 19 arches, a defensive gate at either end as well as a drawbridge. It opened twice a day to allow tall ships to pass through. The bridge was certainly stronger, but there were still problems.

Small boats had difficulty navigating their way through the narrow arches. During the winter the Thames would often ice over. This meant that ships with cargo couldn’t unload in London.

In medieval times it was normal to build shops and houses on bridges and London bridge was no exception. As well as the shops and houses there was also a chapel with a crypt built into the bridge. Peter the Bridge Master was buried in the crypt.

People paid rent to live on the bridge and the ships and boats paid a toll. Eleanor of Provence, the wife of Henry III was in charge of the money. Instead of using it to maintain the bridge she kept it for herself. It didn’t take long for the bridge to fall into disrepair once again.

During the 12th century, a horrible tradition started. Traitor’s to the crown had their heads displayed on the drawbridge spikes.

The first head displayed was the Scottish knight William Wallace. He was one of the main leaders during the First War of Scottish Independence. He eventually became the Guardian of Scotland.

In 1305 he was hung drawn and quartered. His head was dipped in tar and then put on a spike on London Bridge. The film Braveheart, with Mel Gibson, is loosely based on his life. You can visit the Wallace Monument in Stirling, Scotland. They have his steel sword on display even though there’s proof it couldn’t have been his. Apparently, it would have been too heavy for him, but it is a popular part of the Wallace legend.

During the Great Fire of London in 1666, a gap in the bridge prevented the fire from spreading further. But, it did destroy the north end of the bridge.

During the 1700s the buildings on the bridge were removed. A great arch was created to ease the passage for ships and the road above was widened. But, by 1799 it was decided that a new stone bridge should be built.

This bridge was completed in 1831. It became one of the busiest points in London. Unfortunately, though it began to sink at one end. By the 1960’s it became obvious that the bridge needed replacing once again.

In 1967 the council of the City of London put the bridge up for sale. An American oil tycoon snapped it up. The newspapers reported that he thought he was buying Tower Bridge. This does make sense because it is much more attractive. Nobody corrected his mistake and London bridge was dismantled and shipped to Arizona.

The brand new bridge took five years to complete. Queen Elizabeth opened the new bridge in 1973. This time the bridge was built using concrete and steel.

Steel was first used to strengthen concrete in the early 1900s. The first reinforced concrete rail bridge was constructed in Dundee in 1903. But steel wasn’t used significantly in buildings until the 1930s.

By the 1960s prestressed concrete was being used with box girders like London Bridge. Another example of the use of steel in bridges is the Severn Bridge. It has a fully welded steel deck.

Nowadays steel isn’t only used to strengthen bridges. We use steel in residential construction as well as commercial structures. Companies like B&S Steel supply the construction industry with a wide range of products.

It’s just a shame they weren’t around when the Roman’s built the first Tower Bridge. 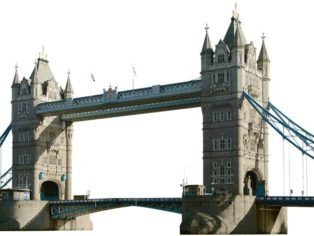