A 1,000sq m Sika Sarnafil water tight roofing system has proved to be the perfect fit for a prize winning theatre. The Sika Sarnafil membrane used was G410 15ELF Dark Grey, a cut-fall insulation system was installed along with 5000E vapour barrier.

Liverpool’s newly rebuilt Everyman Theatre has just been awarded the RIBA Stirling Prize for best new building of the year which is topped with the Sika Sarnafil Roof.

The iconic theatre beat five other buildings and fought off competition from the likes of The Shard and the Olympic swimming venue to win the honour – the Royal Institute of British Architects’ highest accolade, the Stirling Prize.

The old theatre, a former chapel built in the 19th century, was falling into a state of disrepair with a leaking roof, but by reusing the theatre’s brickwork it meant 90% of the materials were recycled.

The specific requirement that led to the Sarnafil waterproofing system being specified for this project was the 20 year guarantee.

“Richmond Roofing did a fantastic job on the Everyman Theatre, their workmanship was second to none. The client is extremely happy with the outcome and the project was finished ahead of schedule; overall this was a great success and it certainly deserves to win the prestigious Stirling Prize.” 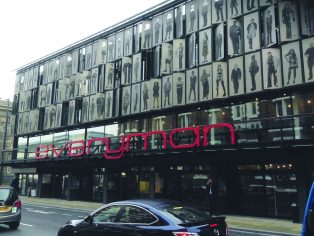