Purcell has been awarded listed building consent to convert part of the Grade II* listed former Young’s Brewery into a new Heritage Centre and Microbrewery – submitted on behalf of Greenland Group.

Greenland appointed Purcell in July 2017 to help develop and establish the cultural identity of the new Ram Quarter site in Wandsworth, South West London. Plans for the area are due to include a major residential development, alongside a cultural hub which will be installed within the Grade II* listed brewery building being designed by Purcell.

A bespoke microbrewery – which will maintain the destination’s record as Britain’s oldest continuously- brewing location – is being designed to work within the building’s constraints. In the Heritage Centre, exhibition areas will tell the history of the site through images and artefacts, which Purcell is also responsible for curating.

The new Ram Brewery and Heritage Centre forms part of Greenland’s development in Wandsworth which celebrates the heritage of the area and the site’s industrial history. As well as designing the solution for the rehabilitation of the site, Purcell has taken an advisory role as cultural advisor for the whole Ram Quarter, providing a ‘Sustainable Delivery Plan’ which focuses on the wider strategy for the Borough of Wandsworth. The project is expected to begin on site in Spring 2018.

Bruno Bernardo, architect at Purcell, said: ‘Having the opportunity to lead the development on all aspects of the intervention has allowed us to create a careful and consistent proposal where the past and future meet in an exciting new space within a revived site full of new opportunities. By working alongside the council and several community groups, we have devised a strategy that will link the rich history of the site with a contemporary approach for new generations of residents and visitors to celebrate and enjoy.’

“We are delighted to have received listed building consent for the regeneration works underway on the historic Ram Brewery buildings. Ram is a site of great historical significance, not just in London but in the UK, and we are very excited to be bringing it back to life. We are creating a new hub for the area, where people can learn about the site’s brewing history, and also enjoy this dynamic new destination’s shops, cafés and restaurants bordering the River Wandle in the heart of Wandsworth.” 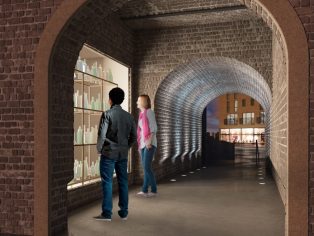