Lion Salt Works, which opened to the public on 5 June 2015, has been awarded the Heritage Award 2015 in the North West Regional Construction Awards – a second time for conservation architects Donald Insall Associates after their Chester City Walls project received the award last year. The project was also Highly Commended at the RICS North West Awards 2015.

Donald Insall Associates initially provided Lion Salt Works with a Conservation Plan, developing innovative proposals for the reuse of the Scheduled Monument, which eventually received £5 million HLF funding. The practice has been subsequently appointed to provide architectural services for the restoration of the delicate industrial buildings and regenerating the site as a visitor attraction and a salt museum. A new visitor centre was provided as part of the project.

Established in 1894, Lion Salt Works was built by the Thompson family, remaining in their possession for five generations, ceasing trade in 1986. Salt was produced by evaporating brine over an open fire in large iron pans. It is the last open pan salt works in the UK and one of three remaining in the world.

“Saving the Lion Salt Works has been a long journey which started 15 years ago for us. We have remained committed to the project throughout and are delighted that the high quality of the end result has been recognised in this award. Through careful conservation the site has been transformed from a collection of derelict and dangerous buildings into a new visitor attraction, and it stands as a unique record of a now historic industrial practice.” 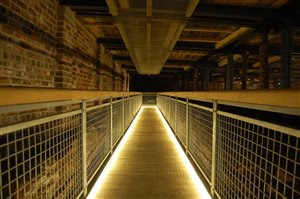