A new report from property investment experts Property Frontiers has highlighted investor interest in regional cities – those urban areas that don’t make the list of the top ten biggest cities in the UK, but which make up the country’s top 100 towns and cities by population.

“Far from being promising underdogs, regional cities frequently outperform much bigger and better-known cities on a wide range of metrics that signal dynamic economies, changing fortunes, and promising housing markets.”

Property Frontiers has noticed a growing trend in interest from investors looking at city metrics in depth, from population growth rate to number of business start-ups. These factors are increasingly influencing investors decisions about both where to buy and how much to spend.

Based on its own analysis, Property Frontiers has highlighted the UK’s 10 regional city star performers, each of which is leading the country in one or more metrics.

These are presented in the 2017 Regional Cities Market Insight report.

Three of the cities highlighted in the report are Doncaster, Halifax and Bradford.

Doncaster is home to high tech employers including Amazon, BAE Systems, IBM, and McLaren. Halifax has been enjoying a notable surge in interest in its property market since the newly renovate Piece Hall opened, drawing in 250,000 visitors since August. Bradford, meanwhile, is home to more FTSE 100 companies than any other Northern city.

“Each of these cities displays unique characteristics that are serving to draw investors away from larger urban areas and out into the regions. Regional prices are often lower than those in larger cities, creating the potential for higher rental yields. This factor is adding further weight to the attractions of regional investment.”

Danum House in Doncaster is a prime example of the kind of regional city investment that is capturing investors’ attention. The Grade II listed department store is home to 78 spacious apartments, ranging from one to three bedrooms. One-bedroom homes there cost from as little as £83,000, with yields of 8.5% per annum assured for five years. With mortgage finance available, investors can be a part of the city’s future for as little as £25,000.

“The concept of a ‘regional city’ is a very broad one. Not every such location will perform well in terms of an investment location, so it’s essential to do some homework and identify those regional cities that offer the most compelling cases for investment. Just being a regional urban area doesn’t automatically qualify a location as a successful investment opportunity – that’s why we’ve produced the 2017 Regional Cities Market Insight report! It’s a way of highlighting those cities – like Doncaster – where property is presenting some really exciting opportunities.” 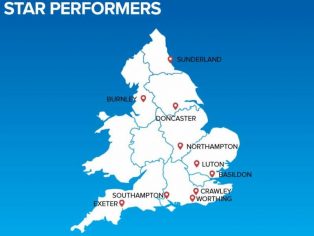