LDA Design’s concept for a new public space in Leicester’s city centre has now been realised following the completion of work on Jubilee Square.

The £4m scheme provides an attractive new gateway to the city’s Cathedral Quarter and the site of the discovered remains of Richard III.

The project was commissioned by Leicester City Council as part of Connecting Leicester – a major programme of work launched by City Mayor Peter Soulsby to improve pedestrian links between Leicester’s historic buildings and heritage sites and the modern heart of the city.

Jubilee Square has transformed an area of the city dominated by a surface level car park into a brand new public space that features an event square, lawns, a terraced garden, and a new courtyard garden for the historic Wygston’s House.

LDA Design worked with Leicester City Council to develop plans from concept stages through to completion. In partnership, LDA Design and the council have liaised with local people throughout the process, ensuring that the public realm meets the needs of the community both now and in the future.

Located in the cultural heart of the city, the square serves as part of a wider regeneration scheme to renovate the city centre. There is improved access ensuring that key shopping, housing and heritage areas are reconnected through increasing footfall to the west of the city.

“We are thrilled to have delivered such a transformation and a new type of space to the city centre. The design allows for a year round programme of events, as well as providing a beautiful space for people to enjoy on a day to day basis. The layout also unlocks key connections from the city centre to areas of interest beyond it”. 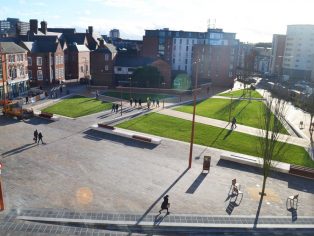