A residential scheme near Headingley that houses homeless people who are recovering from addictions, has been named Yorkshire’s best residential development at the inaugural Royal Institution of Chartered Surveyors’ (RICS) Social Impact Awards.

Regent Lodge in Hyde Park is owned and operated by longstanding Leeds charity, St George’s Crypt, and was designed by Brewster Bye Architects. Work on the development completed last year and it now provides 14 self-contained studio apartments for residents with alcohol dependency issues, as they prepare to live independently.

The scheme was developed in partnership with Leeds City Council, which provided low cost loan facilities as well as financing 30% of the capital costs through its Right to Buy Replacement Programme. Vistry Partnerships Yorkshire was the principal contractor.

The RICS Social Impact Awards launched this year, replacing the organisation’s previous awards format, and are now the only nationally recognised awards programme that show the impact of the built environment on people’s lives. The awards run across 12 UK regions and the regional winners will now compete to triumph in the national finals in September.

The RICS judges praised how Regent Lodge successfully provides tailored support to members of the homeless population, with alcohol dependency issues, and creates step changes in an independent setting for residents. They also highlighted how the building enhances the local street scene whilst acknowledging its context within the area, as well as being part-funded by capital receipts from the Local Authority’s right to buy disposals, providing a measurable return on investment to the wider community.

Nathan Wilkinson, a director at Brewster Bye Architects, said: “Regent Lodge is the first development of its kind in Leeds and is the culmination of many years of persistence and determination to successfully develop the site and part-finance it through the Right to Buy Replacement Programme. It is now making a genuine difference to people as they recover from addictions and prepare to live independently.

“Winning this award is a big achievement for everyone involved and epitomises what the new RICS Social Impact Awards are all about.”

Chris Fields, CEO at St George’s Crypt, said: “Less than 12 months since Regent Lodge opened, it’s already making a genuine difference to people who want to turn their lives around. It offers a home rather than a hostel bed, which creates feelings of self-worth and purpose, and is proving to be life changing for people as they strive to get back on their feet, return to work, and set their sights on living independently in the future.

“We had to overcome all types of hurdles to turn our vision into a reality but it’s been worth it, and to have our efforts recognised with this award is a big coup and will stand us in good stead for future developments that we’re currently progressing with in and around Leeds.”

St George’s Crypt is based in Great George Street, underneath the thriving church of St George’s in Leeds and has been at the frontline of support for homeless, disadvantaged and vulnerable people in Leeds and its surrounding areas since 1930. 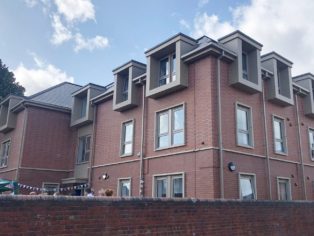