Independent design, environment and sustainability consultancy, LDA Design, in association with architects, UHA London, has been appointed to masterplan one of central Moscow’s best-known former industrial sites – Serp and Molot, or Hammer and Sickle.

The 58 ha (143 acre) site has been the subject of a high profile international design competition jointly organised by the City of Moscow and Donstroy Invest, the developer and owner of the site. The masterplan, due for completion by 2021, will create over 1.8 million square metres of prime mixed-use space with an estimated investment of 180 billion Roubles (over €3.76 billion). The design competition attracted 52 applications made up of 157 companies from 17 countries. In a strongly contested second stage the LDA Design and UHA London team emerged as the preferred team.

“What set our scheme apart was the idea of using a new city park to act as the catalyst for transformation. As the designers of the London 2012 Olympic Park we used our knowledge and experience from one of Europe’s biggest regeneration projects to guide our vision for Serp and Molot.”

“Serp and Molot continues UHA LONDON’s track record of successful collaborations with LDA Design – marrying a strong masterplan and landscape design narrative with innovative and futuristic architecture – Serp and Molot will be a game changer for the Moscow real estate market and become a lifestyle choice for Muscovites.” 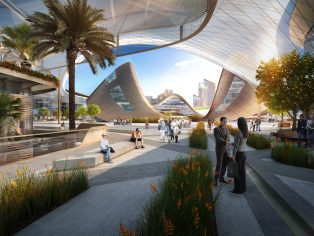