A selection of photographs by prize-winning Canadian artist Edward Burtynsky has been brought together for a new exhibition by Phase 2 at Arup’s gallery space, 8 Fitzroy St, London.

The exhibition explores the multi-faceted nature of our relationship with water through photographs made by Burtynsky between 2010 and 2013 in different locations around the world, including Gujarat, India; Yunnan Province, China; Aragon, Spain; and Florida, USA.

Shot from aircraft, helicopters or drones several thousand feet above the earth, the large-format photographs are both detailed and panoramic, beautiful and disturbing. Though not immediately apparent, all the photographs in this exhibition connect to water and our use of this finite resource.

They include Dryland Farming #17, Aragon, Spain, 2010, and Pivot Irrigation/Suburb, south of Yuma, Arizona, USA, 2011, which show the effects on the environment of importing water supplies for intensive farming. By contrast, Rice Terraces #4, Western Yunnan province, China, 2013, documents the sustainable rice-growing method that has been used for over a thousand years by the Hani community in China. Other themes presented in the exhibition are the salt extraction industry in Gujarat, India, and phosphate mining in Florida, USA.

Burtynsky has been photographing human exploitation of the natural world since the 1980s, including the oil industry, mining and quarrying and agriculture. Between 2009 and 2013 he focussed his attention on water and used this project as the basis of the 2013 film Watermark which he co-directed with Jennifer Baichwal.

A publication designed by Wolfram Wiedner accompanies the exhibition with contributions by Henk Ovink, Special Envoy for International Water Affairs for the Kingdom of the Netherlands; Mark Fletcher, Arup Fellow and Global Water Business Leader; Amy Sherlock, Deputy Editor of frieze and Jennifer Greitschus, Head of Exhibitions, Arup, and curator of the exhibition. 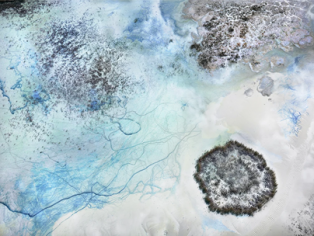