Landy Vent UK Ltd completed formal EU testing for their Ecco Stove models EC678 and EC730 which achieved ground breaking efficiency; carbon to atmosphere and particulates to atmosphere achieving up to 88% efficiency and CO of .07 when the proposed European Standard for 2022 is believed to be harsh (but yet in consultation for 2018) of 0.10 CO and 75% efficiency. This balance being difficult to achieve as the lower the CO requirement, the lower the efficiency falls.

Ecco Stove have bucked the trend by increasing efficiency whilst lowering CO (Carbon monoxide to atmosphere) such similar standards have already been adopted by some more forward thinking countries in Europe despite the proposal not yet having gone through a final consultation period.

The heat storage benefits have not been affected, so now we have a first in UK design and manufacture for slow heat release appliances (no need to attend or refuel the appliance constantly to wrap your home in warmth). The products will have their first airing to the public at the Hearth and Home show in Harrogate in June with models on live display.

The Ecco Stove range are manufactured in Britain following UK patents, now approved, and patent applications pending for, and sales being made in Europe; Russia; Canada and America where the US/CAN current standard of 7.5mg of particles reduces to the proposed new tougher standards of 1.3mg of particles to atmosphere in 5 years time (Ecco Stove achieved 2.1/mg when tested at OMNI Laboratories 2 years ago) 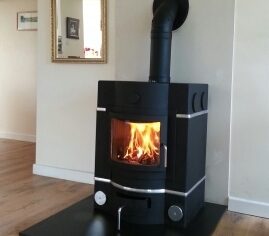