Planning permission has been granted this week for the £17m restoration of Auckland Castle in County Durham. This announcement by Durham County Council is a key step in the wider £60m renovation of one of Britain’s most important historical sites, which will be developed by Auckland Castle Trust as a new heritage destination. The Castle will welcome 120,000 visitors each year, creating over 100 full-time jobs and generating £3m of annual revenue in an ambitious heritage-led social regeneration initiative for the North East of England.

Durham County Council has approved a renovation scheme which will see the former palace of the Prince Bishops of Durham, described by Diarmaid MacCulloch, Professor of the History of the Church, University of Oxford as “the third best episcopal complex in the world, beaten only by the Vatican and Avignon,” undergo the most significant development in its remarkable 1,000 year history.

The Heritage Lottery Fund (HLF) supported project will draw on the expertise of world-leading specialists in the fields of heritage, conservation and architectural design in order to revitalise and make available to the public, one of Britain’s finest buildings, which has played a key role in the nation’s history, enabling Auckland Castle to be understood and enjoyed by a wide range of audiences.

Jane Kennedy, Partner at Purcell UK said that the company were excited by the brief:

“Purcell is delighted to be involved as design team leaders in the exciting project to repair and represent Auckland Castle at the heart of this regeneration scheme.”

“Detailed historical studies and archaeological investigations have informed the design team during the development of proposals to repair and reuse the building. we have gained a new understanding of the the medieval castle, and of the 18th and 19th century bishops who developed both the formal entrance and suite of state rooms. These rooms will be redecorated and presented in order to tell the stories of the bishops from the medieval period to the present day.”

“It will be a permanent and dynamic multi-media installation of both national and international significance presenting works of art and artefacts covering prehistory to the present. The visitor will be able to see objects going back to when humans first started functioning as a society as we would understand it today, right up to our modern times. We will be drawing on film, audio, interactive displays and stunning relics to tell the story of the many diverse faiths that make up the fabric and history of the British Isles.”

Among the items that will be on display will be the Cottingham Tank, a Viking lead font that is a fusion of Pagan and Christian beliefs. The Auckland Castle Trust has also acquired four rare stained glass panels from Compton Verney that were among the last to be made before the Reformation, as well as two striking Bronze Age swords that were deliberately deposited as votive offerings.

Exhibition designers, Casson Mann will realise the exhibition and interpretation plan for the castle, bringing to life the multiple narratives of the site’s history and architecture and creating an exhibition programme and visitor experience with broad appeal.

Director of Casson Mann, Dinah Casson said of the project:

“To be working on this project is both a privilege and a responsibility. The opening up of Auckland Castle to new visitors is a rare opportunity to explain many of the mysteries surrounding it, as the long occupation of the same building by such a well documented succession of strong characters has created one of the wonders of the North East.”

The castle’s illustrious past is reflected in a permanent collection of museum quality European religious art which includes the remarkable series of paintings Jacob and his Twelve Sons by the Spanish Golden Age artist Francisco de Zurbarán. Originally purchased by Bishop Trevor in 1756 as a potent symbol of religious tolerance, the series represents the largest collection of the artist’s work outside Spain.

Durham County Council has granted further planning consent for a striking £2.5m Welcome Building, also designed by Niall McLaughlin Architects. A bold intervention in the castle scheme, situated outside the castle walls on the edge of the adjacent Market Place. Commenting on the project, Niall McLaughlin called the process, “a benchmark for intelligent constructive debate” adding, “the development process for the Welcome Building was a good example of positive dialogue between planners, designers, local people and English Heritage. I have no doubt that our collaborative discussions over the last year have produced a proposal that none of us could have imagined at the outset.”

The design will provide orientation for people arriving at the Auckland Castle site. The building incorporates a timber framed building and tower, with an observation platform 15m up offering panoramic views of the surrounding area.

Commenting on this aspect of the design, Niall McLaughlin said:

“Visitors will ascend through the tower to a hall beneath a high roof containing exhibits about the history of the Castle in its setting. We have conceived of this room, like a market hall, raised up above ground level.”

The design device of the tower was chosen to “offer visitors views out over the Castle, the town and the parkland that flanks it… As such, the structure bears comparison to other corner towers and it takes its place amongst the other fantasies of fortification that have been constructed around the central castle complex over time.”

The building will house the ticket office, gift shop and contain a first floor space for exhibitions, education outreach and meetings.

The renovation of Auckland Castle will create a vibrant and dynamic new heritage attraction, a must-see destination of genuinely international status and significance. The revitalisation of the castle complex will also catalyse the regeneration of Bishop Auckland, County Durham’s second largest town, delivering wide-ranging socio-economic advantages to the region. Auckland Castle will become the focus for an annual injection of £3m in visitor income to the local economy, creating multiple and varied opportunities for the local community including over 100 full-time employment openings and over 20 full-time training positions.

Over the last two years, Auckland Castle Trust has already created over 40 jobs with numbers expected to grow rapidly as tendering for the renovation work commences following the planning consent.

The restoration of Auckland Castle has been supported by the Heritage Lottery Fund with initial support of £1m awarded in May 2012. An application for the full grant of £9m was submitted in February 2015, with a decision expected in May 2015.

Chief Executive of Auckland Castle, David Ronn, remarked on the ambition for the heritage-led scheme:

“The Castle, together with its unique collection of Zurbarán paintings, represented in 2012 the start of our journey, and became the foundation and the inspiration for all that has followed in our ambition to create a world-class heritage-led regeneration project. When finished in 2018, visitors will be welcomed to an extraordinary place which is accessible to all, opened up and restored, and telling the stories of Spanish Art, the Prince Bishops and the history of Faith in this country.

The calibre of the design team that will help us achieve this is unrivalled. With a beautiful new wing designed by leading contemporary architect Niall McLaughlin, sensitive redevelopment by architects and heritage specialists Purcell, and dynamic exhibitions created by Casson Mann, we will bring the Castle to life and allow it to be enjoyed by many.”

Work on the multi-million pound scheme is expected to start in the spring of 2016 and be completed by 2018. 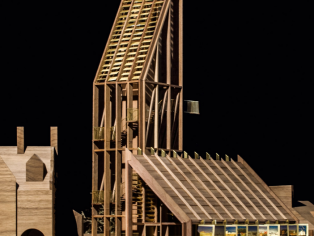