One year on from London 2012, Design Council has launched a new digital archive to house over a 100 hundred case studies submitted by the designers and architects that contributed to the success of the Games.

Following a landmark deal between the International Olympic Committee (IOC), the British Olympic Association (BOA) and the UK Government, designers and architects that worked on London 2012 are for the first time allowed to publicise their involvement and gain recognition for the part they played in last year’s golden summer through the Supplier Recognition Scheme.

The Beyond 2012 website showcases – with video, photographs and first-hand accounts – the stories of the designers and architects that made the Games happen. Challenged to find truly sustainable, spectator-centred and pioneering ways to deliver Europe’s largest urban transformation and the world’s biggest sporting spectacle, Britain’s designers stepped up – in some cases helping develop new standards and ways of working.

‘Design’ for the Games meant much more than the huge infrastructure and stadia in the Olympic Park, it resulted in an integrated design approach (known as the design grid) which was an essential part of creating an instantly and globally recognisable London 2012 brand. This integrated design approach was not just about creating a logo and a collection of buildings, but a complete Games, where the design was able to flex and spread seamlessly from London 2012’s physical architecture through to its digital identity, its venue signage and way-finding, the staff and volunteers’ uniforms, the mascots, Olympic Torch and Cauldron, and beyond.

The Beyond 2012 website aims to help designers and architects market their work and win UK and international contracts. Many have used their experience working on London 2012 to grow their businesses and win significant contracts to deliver projects for Rio 2016 and Russia 2018 FIFA World Cup. Aecom, for example, has won a number of contracts to work on Rio 2016, including the main Olympic park’s infrastructure and landscaping, having carried out similar work on London 2012.

As with London 2012, the Beyond 2012 website aims to inspire a generation. Britain’s design sector is world leading and Design Council aims to inspire future young talent by creating this online resource. 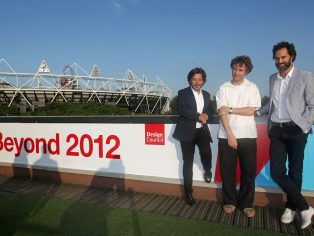