Ahead of the 2018/2019 season, the developer contributed £500 for matchday programme sponsorship. As proud sponsors of Long Melford Football Club, Kier Living Eastern are delighted to be associated with a grassroots football club that boasts such a long and distinguished history.

David Thomas, Kier Living Eastern’s Sales & Marketing Director credits this longevity to both the players and backroom staff that have been associated with the club since its inception in 1868. David says:

“Long Melford Football Club’s history is unprecedented. To be celebrating their 150th anniversary is a testament to the club’s hard work over the years, both on and off the pitch. Each and every individual that’s walked through the club’s doors has helped shape what they are today.

Colin Woodhouse, who sits on the Board of Directors for Long Melford Football Club said:

“We’re delighted to be celebrating 150 years as a club. As part of this, we are planning upgrades to our facilities at Stoneylands. The new sports & leisure facility that we’re building will be available to not only both the senior and youth teams who use the ground on a regular basis, but the wider community as well.”

Kier Living Eastern are the developers of Elms Croft, located on Rodbridge Hill. Their latest Long Melford development is a charming collection of one & two bedroom apartments and three & four bedroom houses. These homes offer views across the Suffolk countryside and are well situated for the village’s range of facilities.

A new showhome, named The Dante, is now open for viewings, ideal for getting a feel of what it’s like to live at Elms Croft. The Dante is a 4-bedroom home with an open plan kitchen/family room, with a separate living room, study and utility room. There is also a master bedroom with an en suite and double fitted wardrobes, as well as three further bedrooms which make up this home.

“We’re excited to welcome house hunters to Elms Croft. The new showhome offers an opportunity for potential buyers to see what life is like there.

“These homes appeal to a range of buyers, from couples and families to first time buyers.” 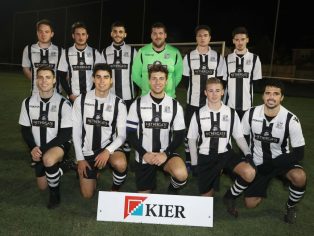