A talented young apprentice from leading house-builder, Kier Homes, has been named as the UK Construction Group’s (UKCG) Apprentice of the Year at the organisation’s annual lunch, held in central London this week.

Based at Kier Homes’ Connect21 development in Peterborough, 21-year-old Simon Holland was commended for demonstrating exceptional technical ability and a real enthusiasm to succeed. Judges were impressed by his commitment to his role as an apprenticeship ambassador and his work on environmental schemes in the local community.

Simon has been with Kier Homes since February 2013 and is currently working towards his NVQ Level 2 in site carpentry. Since he began his apprenticeship he has developed a range of skills that are applicable industry-wide and has been invited to speak at employability events on behalf of the Construction Industry Training Board (CITB).

Commenting on his accomplishment, Simon said:

“I am delighted to have been recognised by the UKCG with such a prestigious award. The support I have received throughout my apprenticeship to date has inspired me to strive for excellence in everything I do and I look forward to telling more young people about how rewarding a career in construction can be.”

“The whole Homes team is incredibly proud of Simon for his fantastic achievement. Apprentices are very much part of the future of our organisation and the industry as a whole, and as such we invest a lot of time and energy into developing young talent. It is great to have both his commitment and ours rewarded through awards like this.”

“The future of construction will be founded on the skills and talents of our people. Our apprentice winners have truly excelled in their chosen trade and are an inspiration to other young people considering a construction career.” 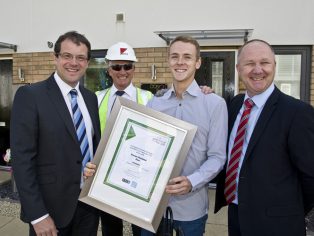