Joseph Walsh Studio presents: MAKING IN/PLACE, an online seminar sharing the passion and mastery of inspiring individuals in the world of architecture, design and craft

For the past three years, Joseph Walsh’s creative design studio has led the MAKING IN seminar, a global discussion platform with an impressive panel of leading global designers, architects, artists and crafts people, conversing on the culture of craft and making. For its fourth edition, the MAKING IN movement evolves to a digital platform – launching with an online panel hosted by Joseph Walsh Studio in partnership with IPUT and presented by Glenn Adamson. The online panel will be taking place on September 12th, 2020 via Zoom, featuring dialogue of six outstanding contemporary makers conversing on place through key themes of Landscape, Workshop and City. The two-hour seminar will include conversations with outstanding contemporary makers, as well as footage of their workshop and overall environment. This year’s speakers include Joe Hogan, Sara Flynn, O’Donnell + Tuomey Architects, Grafton Architects, Lord Puttnam, Jeremy Irons, and Niall Gaffney from MAKING IN’s event partner, IPUT Real Estate Dublin.

IPUT Real Estate Dublin is the lead supporter for MAKING IN for the third consecutive year. As a custodian of the city in which it operates, IPUT places a value on creative, good design and the role in which culture plays in bringing life and personality to buildings and neighbourhoods. This year, MAKING IN/PLACE will feature conversations inspired by IPUT’s research on placemaking, the future of the work place, and its call for the reinvestment of human factors into urban space, and how creativity can contribute to a place worth living in.

The online event launches the ‘Making In Movement’, which will evolve into a documentary series later this year, titled MAKING IN/PLACE. The three-part documentary on craft and community will feature notable creatives in their own working environments, touching on the relationship making has to place – from resources, environment, sustainability, culture and heritage, to the mastery of an object, the future of the built environment and the future aspirations of place makers. MAKING IN/PLACE extends the conversation around art and design, their role in place-making, and the tremendous value that creative makers bring to society.

“MAKING IN 2020 will expand beyond being an event to creating a platform. This year it will be filmed along with location footage and broadcast from Ireland, featuring prominent creatives in Ireland and will highlight international makers in their respective locations that have participated in MAKING IN over the last three years. We see 2020 as an occasion to emphasis the importance of supporting a making culture and will be asking if this movement could have a broader consequence internationally.” – Joseph Walsh, Founder of Joseph Walsh Studio and Creator of MAKING IN.

“Since its inauguration in 2017, the annual event MAKING IN has convened a broad array of voices, ranging across the fields of art and design. Despite the disruptions of the moment, we aim to continue and extend the conversation around art and design, their role in place-making, and the tremendous value that creative makers bring to society.” – Glenn Adamson, Scriptwriter and Narrator of Making In Place.

“Disruption has been a theme of our recent lives, and MAKING IN/PLACE, is the ideal forum to harness those societal shifts to better integrate the value of the creative industries in our lives to make places, and cities, that are worth living in.” – Niall Gaffney, Chief Executive, IPUT Real Estate Dublin. 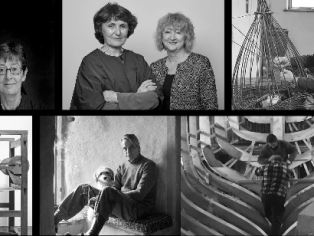