John Laing, the leading international infrastructure investor and asset manager, today announces that it is part of the Westadium Consortium which has unveiled the design for the new Perth Stadium in West Australia. The stadium is expected to be opened in time for the start of the 2018 Australian Rules Football League season.

Contractual negotiations between Westadium and the WA State Government to design, build, partially finance and maintain the new Perth Stadium and Sports Precinct have successfully concluded and the contract will be signed in the coming days.

The consortium holds an extensive range of expertise and specialist knowledge as well as an award winning design team with experience in developing the 100,000 seater AT&T stadium in Texas USA and the Beijing 2008 Olympic National Aquatics Centre in Beijing, unofficially known as the ‘water cube’ due to its striking architecture and construction. John Laing is the investor and manager for the project.

The project is expected to create up to 2600 jobs during the construction phase, delivering $2.5bn of value to the Western Australian economy. 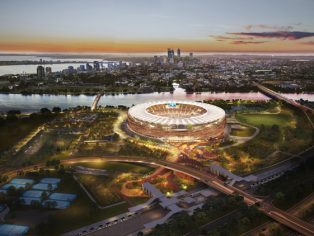