John Laing, the international infrastructure investor, today announced that the Government of Western Australia and Westadium, a consortium led by John Laing and Brookfield Financial, have achieved financial close on the AUS$902 million new Perth Stadium and Sports Precinct in Western Australia. The Stadium will be completed in time for the start of the 2018 Australian Football League season.

In April 2014, the Westadium consortium was selected as Preferred Respondent for the design, build, partial finance and maintenance (DBFM) contract for the Stadium and Sports Precinct. Exclusive negotiations with the State have since concluded with agreement on all the terms and conditions.

The new Perth Stadium and Sports Precinct will be constructed by Brookfield Multiplex and maintained by Brookfield Johnson Controls for 25 years. John Laing is the investor and manager of the project with finance provided by the Canadian Imperial Bank of Commerce and National Australia Bank.

The design of the Stadium and Sports Precinct was created by an award winning team comprising Cox Architects, Hassell, HKS and Arup. The team has extensive international project experience including the redevelopment of the Sydney Cricket Ground and the development of the Beijing 2008 Olympic National Aquatics Centre, nicknamed the ‘Water Cube’.

The Stadium will be one of the best venues in Australia, incorporating a range of “firsts and bests” in design and fan experience with an initial 60,000 seat capacity. The Stadium will include the widest range of seating and hospitality options of any stadia in Australia. Future-proofed Stadium technology will also be provided, including full Wi-Fi coverage.

An estimated 5,700 workers will be directly employed on the project during the construction phase with $2.5 billion of value added to the West Australia economy.

“We are delighted to be working with the State Government and our Westadium partners to deliver a uniquely West Australian Stadium for the sporting fans of western Australia.” 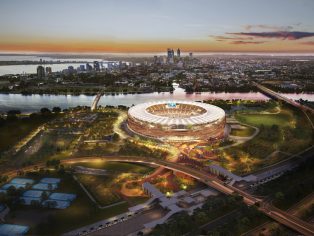