Jefferson Sheard Architects announced their Beverley Campus for East Riding College has been shortlisted for the Committed to Construction in Humber and West Yorkshire (CCIHWY) Awards 2016.

The Campus has also been shortlisted in two categories of the RICS Awards and received a shortlisting for the Civic Trust Awards.

The £14m new-build, which was handed over last September, is integrated with the Town’s new Flemingate Shopping Centre as part of a major mixed-use regeneration by developers the Wykeland Group.

“The new East Riding College campus is a key part of the Flemingate Development, highly visible and promoting education for all in Beverley. Part of our focus for the centre has been to raise awareness of Beverley as a whole; the new campus is a valuable interface between students and the wider community, promoting a thriving educational and cultural environment in Beverley.”

“We are delighted that our new Beverley campus has been shortlisted. The design is stunning and fully sympathetic to its location facing the historic Beverley Minster. The College can now truly claim to be at the heart of its community.” 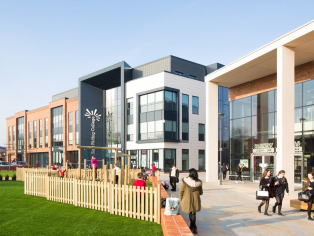