Jason returns to the Redrow fold

AS THE proud owner of a brand new Redrow home and having previously worked for the firm, newly appointed sales director Jason Newton is one of the company’s greatest advocates.

In fact the father of five, who has just returned to his role as sales director for the NW division following an 11 year absence, has lived in Redrow built homes for more than 15 years.

“It’s great to be back at Redrow. It’s a company I admire and I’m very proud to work for. I can convincingly say I believe we build the best product around as I’ve lived in Redrow homes myself for many years.”

Jason started out in the housebuilding industry as an estimator before moving into sales as an advisor. He first joined Redrow in 1999 as a sales manager and undertook the company’s senior management training programme before gaining a promotion to the role of sales director for the North West. He left in 2004 and has since worked for two of the country’s largest volume builders, Taylor Wimpey and Barratt, before making the move back to Redrow to oversee sales in the North West of England and North Wales.

“I’m returning to Redrow with a decade more experience from across the industry and join NW at a very exciting time. We’re aiming to grow the division by more than 30% in the next 12 months with a target of building 500 homes in the next financial year. We’ve got some fabulous developments launching, including three in Hartford, Cheshire, which will all be impressive showcases for our traditionally styled Heritage Collection homes. Other developments in the pipeline include our garden village venture in Woodford which, subject to planning, will feature more than 800 new homes on almost 500 acres of land.”

“It’s great to have Jason back in the fold. I worked alongside him at Redrow earlier in his career and am confident his in-depth knowledge of the industry and strategic expertise will be an asset to us as we look to expand the division and bring some flagship new projects on stream.”

One of 11 Redrow divisions operating across England and Wales, NW currently has 14 live outlets with a further six scheduled to open before the end of the company’s financial year this June.

Nationally Redrow builds around 3,500 new homes annually across England and Wales and directly employs 1,550 people. Its primary emphasis is building traditional, family housing from its Heritage Collection, but it also has a number of bespoke schemes, including luxury country homes and high value apartment schemes. 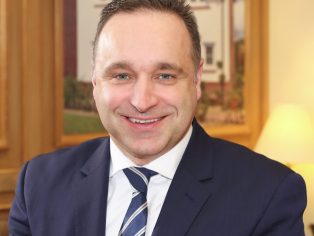 Jason Newton has returned to Redrow.