The company has been appointed to a four-year framework contract by Warwickshire Police and West Mercia Police covering servicing, maintenance, reactive repairs and minor works. The award has a potential value of up to £9.1 million over the lifetime of the agreement.

The firm has also won a five-year contract worth £10 million to replace kitchens and bathrooms in around 1,600 properties in Birmingham, Coventry, Stoke, Walsall and Wolverhampton for housing organisation Midland Heart.

The company now plans to open a new depot in the West Midlands and expects the contracts to secure employment for around 100 local sub-contractors as work gets underway. They represent a major development for J Tomlinson as a significant provider within the West Midlands region and contributor to the local economy.

“I am very pleased to announce these latest appointments for J Tomlinson in the West Midlands, a region in which we have worked for many years and where we have a growing reputation.”

“Recently J Tomlinson was proud to have been named in Deloitte’s Businesses Leading Britain 2014 report, which provides insights into the UK’s 1,000 fastest-growing businesses with annual revenues between £30 million and £1 billion. These West Midlands contracts represent significant appointments for us as we continue our expansion, and cement our position as a key player.”

The contracts for both Midland Heart and Warwickshire Police and West Mercia Police have just begun, while work has recently got underway on site for the new nursing home and pavilion in Jockey Road, Sutton Coldfield.

J Tomlinson, which offers services in construction, refurbishment, repairs and maintenance, mechanical and electrical engineering, energy efficiency, renewables, fit out and facilities management, is based in Lilac Grove, Beeston, near Nottingham, and has depots across the East and West Midlands. 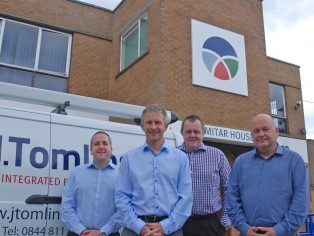