It had to be Redrow for the Vickerys

After relocating from a Redrow home in Yorkshire to one in Kent Stephen and Diana Vickery are so happy that if they were to move again they’d buy a third property from the homebuilder.

The couple are not alone in their experience – Redrow has built a reputation for quality and recently earned a fifth consecutive five star award for customer satisfaction from the HBF after more than 90 percent of its homeowners said they’d recommend the company to a friend.

“Before we bought our last home in Beverley in Yorkshire we spent a year looking for somewhere to live. We chose Redrow then because of the quality of the build, the size of the property and the layout. It was just what we wanted.”

“We liked our old home so much that when it came to relocating for work, we specifically looked for another Redrow home.”

Stephen describes the layout of their new home as ‘perfect’ with an open plan kitchen and dining room, separate lounge and WC to the ground floor. Upstairs there are three bedrooms, with the master bedroom benefitting from an en-site to complement the family bathroom.

“It’s a lot more modern and we had more opportunities to choose the fixtures and fittings. We spent about £15,000 on extras making it our own,”

“The quality of the build and the fixtures and fittings is excellent and so much better than the competitors. I would buy another one if we moved again! From the sales consultant to the site manager, everyone’s been fantastic – nothing is too much trouble.”

Proof that Redrow homes stand the test of time is the speed in which the Vickerys sold their property in Beverley.

All of the homes at Davington Mews have now been sold, but there are Redrow developments across Kent including Archers Park, Sittingbourne; Highwood Green, Marden; St Andrews Park, Halling; Saxon Woods in Ham Street; Waterside Reach in Tonbridge and Ratio in Slade Green. 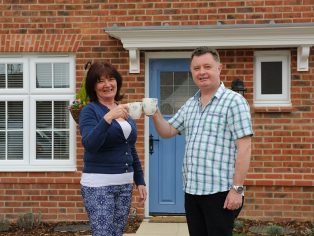 Diana and Stephen Vickery outside their second Redrow home.

Diana and Stephen Vickery say the open plan layout of their new home is ‘perfect’.