Iowa City’s long search for an artist to create the signature public artwork for the City comes to an exciting conclusion with the selection of British artist, Cecil Balmond. Dr. Balmond, who has family ties to the mid-west, will now move forward with his ideas for an emblematic sculpture, forming the focal point of the downtown pedestrian mall. As a part of the Black Hawk Mini Park Art Project, Balmond’s art will anchor the many diverse aspects of this massive public project. The sculpture itself will mark the first phase of the Iowa City Downtown and Pedestrian Mall Streetscape Redevelopment Plan.

Thanks to the efforts of the Artist Review Panel, Genus Landscape Architects representatives Brett Douglas and Angie Coyer; and Iowa City staff Geoff Fruin and Marcia Bollinger, Balmond was selected over a shortlist of two other notable artists – Vito Acconci and Hans Breder. The panel has cited Balmond’s contemporary sensibility, his extensive experience on large-scale art projects and his desire to use local supplies as the factors through which Balmond became their leading choice.

To fully engage in the project, Balmond wanted to familiarise himself with Iowa City and the Black Hawk Mini Park in particular. During his visit last year, Balmond found inspiration in the creativity and enterprise of the local people stating “The Ped Mall in Iowa City is at the heart of the community and it will be exciting to design a public art piece to focus and animate this key centre of activity.”

The Black Hawk Mini Park Art Project is a fantastic addition to Balmond’s many award-winning public projects, including commissions for the Chicago Transit Authority and Mesa Art Center, Arizona. His light sculpture Snow Words, commissioned by the State of Alaska Arts Council, was named one of the best public artworks of 2012 by the Americans for the Arts, Public Art Network Year in Review. Balmond is the winning artist of Star of Caledonia – a national monument to mark the England/Scotland border and co-designed the ArcelorMittal Orbit with Anish Kapoor for the London 2012 Olympics. 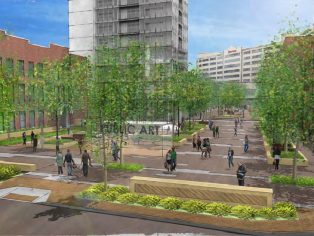