Investing in homes and the future of Acklam

North Star Housing Group is celebrating the official opening of a brand new £1.1 million scheme of affordable homes for rent at Acklam Green, in Middlesbrough.

The scheme represents an important step forward in addressing the need for affordable housing and continued investment in sustainable homes in the area. Acklam Green was developed for Endeavour Housing Association, part of the North Star Group, in partnership with housing developer Bellway, Middlesbrough Council and the Homes and Communities Agency (HCA).

The new development includes 16 affordable family homes, beautifully finished to a high standard and available for rent from Endeavour. The scheme forms part of a larger new build scheme, with Bellway providing a total of 454 properties for sale and rent. The new homes are all built to the Code for Sustainable Homes Level 3, with high levels of insulation and a lower effect on the environment, meaning they are warm and economical to run. The Secured by Design standard – a flagship UK police initiative launched to improve the security of new-build homes and reduce crime – is also built in to aspects of the scheme.

Angela Lockwood, chief executive of North Star Housing Group, explained why this is such an important development:

“We are committed to building more homes for local people, and passionate about supporting local communities to thrive and grow. With this new development, we feel that we are taking positive steps to do just that.

“We are very happy to have worked with Middlesbrough Council, Bellway and the Homes and Communities Agency on this exciting new development. Our investment in Acklam has resulted in opportunities and employment for local tradespeople. As well as new properties, it’s great to see that the development activities in the area have been bringing value to the communities in which we work.”

“We are currently undergoing one of the most ambitious house-building programmes in Middlesbrough’s history which is helping to transform the town.

“It’s vital that we create a range of homes that appeal to all ages and budgets, so that we keep young families here, strengthen local communities and reverse our population decline.

“Developments like Acklam Green are a vital part of that process and I wish the new tenants all the very best in their new homes.”

The first tenants to move into Acklam Green were Ann Matthews and Darren Lee, who were previously based in rented accommodation in Berwick Hills. They were seeking a new place to live after their six year-old son Corey suffered breathing problems due to damp in their former home.

“I was forever taking Corey to the doctors to get inhalers that would help his breathing. On several occasions I had to sit him upright at night because he couldn’t sleep properly.

“Now, though, having moved into our new home with Endeavour he’s had no problems with his breathing. The move went smoothly and it’s a first-class home in a great location. The rent is affordable too and now we have a bit more money in our pockets to buy clothes and other essentials for the kids.” 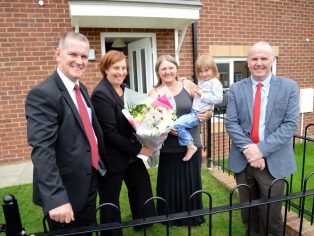